Nobel Prize in Physics 2018 Awarded For Revolutionary Work in Lasers

The prestigious award was given this year to three physicists “for groundbreaking inventions in the field of laser physics.” The event also marks the third time a woman wins the prize.

The Royal Swedish Academy of Sciences announced today the winners of the Nobel Prize in Physics 2018 “for groundbreaking inventions in the field of laser physics.” The prestigious award was given with one half to Arthur Ashkin and the other half jointly to Gérard Mourou and Donna Strickland.

BREAKING NEWS⁰The Royal Swedish Academy of Sciences has decided to award the #NobelPrize in Physics 2018 “for groundbreaking inventions in the field of laser physics” with one half to Arthur Ashkin and the other half jointly to Gérard Mourou and Donna Strickland. pic.twitter.com/PK08SnUslK

Arthur Ashkin was recognized for inventing "optical tweezers that grab particles, atoms, viruses and other living cells with their laser beam fingers." Most notably in 1987, Ashkin used the novel tweezers to capture living bacteria without causing harm to them resulting in the tools being widely used in the machinery of life experimentation.

Science fiction has become a reality. Optical tweezers make it possible to observe, turn, cut, push and pull with light. In many laboratories, laser tweezers are used to study biological processes, such as proteins, molecular motors, DNA or the inner life of cells.#NobelPrize pic.twitter.com/tWK55J4VcP

Shortest and most intense laser pulses

Meanwhile, Gérard Mourou and Donna Strickland were acknowledged for their crucial work in paving the way "towards the shortest and most intense laser pulses ever created by mankind." The duo conceived of a brilliant approach to creating ultrashort high-intensity laser pulses without destroying the amplifying material.

Ultra-sharp laser beams make it possible to cut or drill holes in various materials extremely precisely – even in living matter. Millions of eye operations are performed every year with the sharpest of laser beams.#NobelPrize pic.twitter.com/MiYb4i8AHw

The physicists' newly-invented powerfully-efficient technique was named chirped pulse amplification (CPA). It quickly became a standard for subsequent high-intensity lasers finding many varied applications including in the life-changing corrective eye surgeries that are so common today. 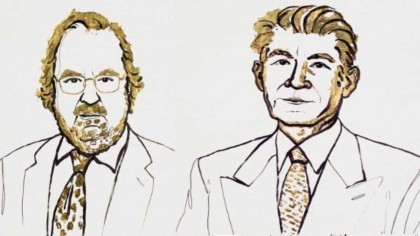 The event also marks the third time in 55 years that a woman has won the Nobel Prize in physics. The prize now brings the total number of female recipients of this particular Nobel to three.

Strickland said she was honored by the nomination but also emphasized the need for more female participation and acknowledgment in the field. "I thought there might have been more but I couldn't think," said the physicist during the ceremony.

"Obviously, we need to celebrate women physicists because we're out there. Hopefully, it will start to move forward at a faster rate," added Strickland. The other two notable women winners were Maria Goeppert-Mayer, awarded in 1963, and Marie Curie, awarded in 1903.

“First of all, you have to think it is crazy!”

Incentive Competitions and the Challenge of Space Exploration

The Engineer Who Spent His Life Fighting Gravity