Once again, the Norwegians have managed to capture everyone’s attention by designing the world’s first full-scale ship tunnel. The architecture firm Snøhetta is responsible for giving life to the design of this ambitious project. 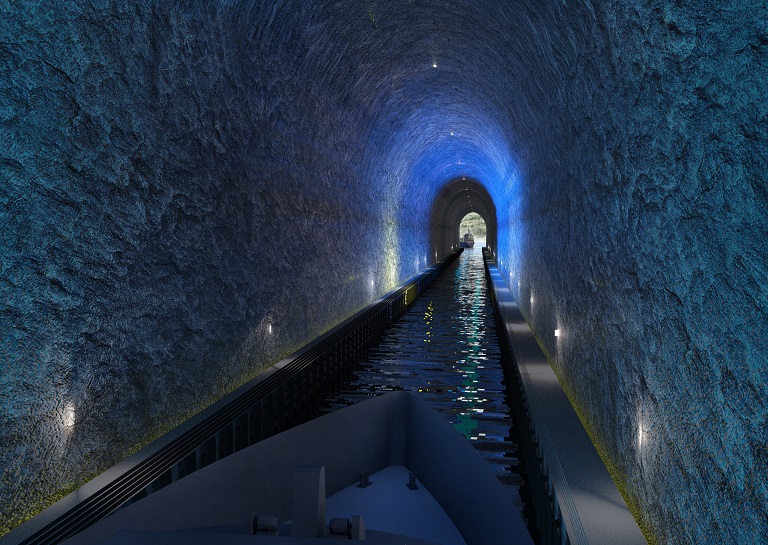 Ship passage and construction of the tunnel

The Stadhavet Sea is considered to be one of the most treacherous seas along the northwestern coastline of Norway. One of the main goals of the ship tunnel project is to create a safer passage for ships to go through the Stadhavet Sea. Because of the geographical location of Stad, where the North and Stadhavet sea meet, its waters go through violent currents and enormous waves that delay shipping schedules and endanger the lives of a ship’s crew. The passage route is to be constructed through the narrowest region of the Stad Peninsula. 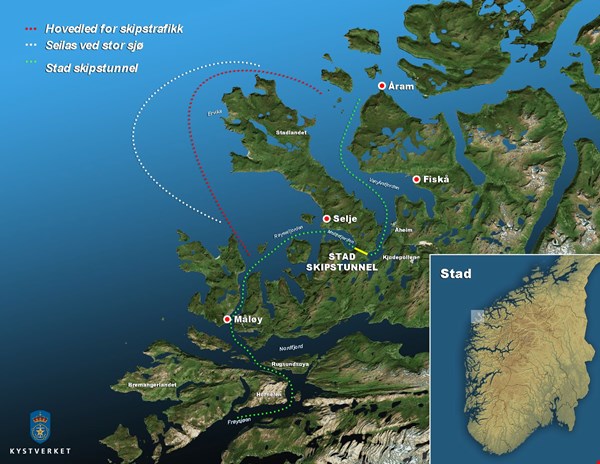 Blasting through 1.7km of solid rock using underground drilling rigs and pallet rigs is the planned tunneling technique that will be used on this project.

In an interview by New Atlas, Stad Ship Tunnel Project Manager Terje Andreassen said "First we will drill horizontally and use explosives to take out the roof part of the tunnel. Then all bolts and anchors to secure the roof rock before applying shotcrete. The rest of the tunnel will be done in the same way as in open mining. Vertical drilling and blasting with explosives down to the level of 12 m (42 ft) below the sea level".

The architectural design of the tunnel's entrance is by the top-class Norwegian architectural firm Snøhetta which has helped the project by providing perspective renders.

When completed, the Stad Ship Tunnel will measure 1.7km long, 26.5m wide and 37m in height which is forecasted to be constructed for around 3 to 4 years from its kick-off date in early 2019. This ambitious project will approximately cost NOK 2.3 billion which was granted by the Norwegian Parliament.

Having worked with Norwegians before in a number of oil and gas projects, when they say that the Stad Ship Tunnel is currently in the feasibility study phase they actually mean that 20% or more of the concept phase will actually be completed too by the feasibility's end date of 2017. I mean, just have a look at this informative video brief of the tunnel that was provided by Kystverket, the Norwegian Coastal Administration. This project is pretty much ready to kick-off. A clean, elegant, technically precise and straight-to-the-point design - the Nords are slightly more evolved than the rest of the world when it comes to architecture and engineering.

The Stad Ship Tunnel project will greatly benefit the fish industry by improving the transport of living fish from fish farms and caught fish. Moreover, it will provide a safe route for speed passenger ferries between Bergen and Ålesund which will make the journey both convenient and comfortable for travelers. A potential overhead bridge is also proposed to provide viewing access for tourists. I've just included the Stad Ship Tunnel in my traveling check-list.