The port authority is planning to test underwater drones that will scan the deep water of the fjord for garbage.

If you have ever been to Oslo Fjord or even seen pictures of this mesmerizing water body, it’s pretty sure that you’ll be taken aback by its beauty. But things aren’t what they seem when you have a closer look. Particularly, if you look deeper!

Oslo Fjord is being filled up with garbage, and the rate is quite alarming. We can even scale the problem to other Fjords in Norway; the condition has aggravated that much. If you think Norway’s government is strict on water body conservation, the story is rather bizarre.

Norway’s government is actually one of the few governments in the world which allows offshore dumping of wastes into the fjords. This has had a sizeable effect on the pristine water of Oslo Fjords. It is the favorite spot for those who want to dump their old or unusable cars.

The extent of the situation was only realized when a dead dolphin wrapped in plastic was washed up on the shores of Fjords. This was a reminder about the level of damage the fjord has been suffering from.

The news gained a lot of attention in social media as people began sharing the demise of such an eloquent creature due to the diligence of mankind. The post got nationwide coverage, and with the combined efforts of environmentalists, the government has finally made a decision to clean up the Fjords.

Cleaning up the lake is not that easy, as you will have to pinpoint where the debris is and then deploy the cleaning team. For this purpose, the government has decided to deploy underwater drones.

The port authority is going to test out the drones that would go into the deep waters of the fjord and scan for garbage. Once they have the location, an electric-powered ship with a crane will clear up the garbage from the seabed. 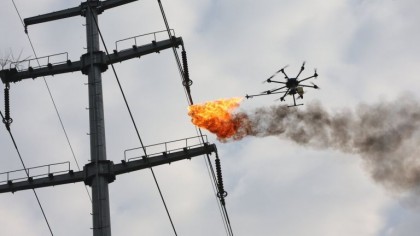 There is also another reason that makes this feat special: it is a never been tried method, and Norway is going to be the first country to implement drones for underwater recon.

It is high time that the government and the people of Norway realize the issue before them. The environmentalists are ready to make some more changes on how Norway should progress in the future.

They are planning to pass bills that are aimed at having a car-free city center and to ban the use of oil to heat buildings in the winter. These changes that are not a mere request but a requirement.

The future of Norway should be aimed at protecting the nature’s bounties. The preservation of Oslo Fjord is surely a step in the right direction, and there will be more to come in the future.

Countries like China are also planning to use drone technology to curb pollution and purify existing resources. We will soon see drones and another form of tech in the skies and the water to help us live a better life and most importantly, creating a better world for the future generations.

Via: NY Times, Next City

7 best underwater scooters to enjoy the sea waves this summer