The country's stunning fjords will only service electric ships starting in just 8 years, putting cruise ships and large ferries in an awkward position.

Luxury travelers and cruise ship fans be warned: There's a good chance your favorite European cruises could see several changes over the next few years. One of Europe's most popular tourist destinations is looking to drastically reduce the carbon footprints associated with them. The Norwegian Parliament recently announced it would make its world heritage fjords zero emission zones by 2026.

“For the first time in the world, there is a requirement for emission-free sailing in the fjords and their harbors.  Norway has long been a world leader in emission-free ferries based on sound political decisions on zero-emission requirements," said Marius Holm, leader of the environmental foundation known as ZERO. "Now the country is taking a step further in the maritime green shift, that has global repercussions. At the national level, this will mean a welcome development towards emission-free solutions on many tourist ships, a significant decrease in greenhouse gas emissions and a halt to harmful local air pollution."

This decision would affect a number of large vessels -- most notably cruise ships that offer dozens of stops through the beautiful Norwegian fjords in just a week's time. Thousands of guests come to the world heritage spots each year to see the landscapes. Geirangerfjord, one of the country's most popular, sees some 300,000 cruise passengers each year.

The seas surrounding Norway are also some of the most polluted in the world depending on the volume of cruise ships and larger vessels coming into port. This problem has only slightly improved within the last decade. In 2006, the Norwegian Institute of Aeronautics discovered that when three to five ships are in the same area, the nitrogen dioxide levels reach 180 micrograms per cubic meter. That's comparable to major cities such as Barcelona and London. Those numbers are also dangerously close to the microgram legal limits put forth by the European Union. 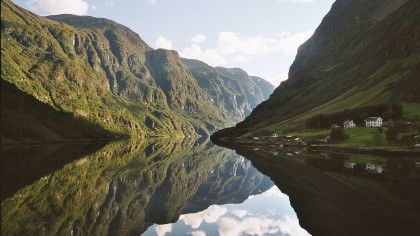 Despite some efforts from the cruise industry to cut back on excess emissions, the number of people around the world going on cruises continues to rise.

However, the problem doesn't stop at more efficient cruise ships. Larger ferries and ship traffic also play a massive role in sulfur oxide and nitrogen oxide levels. Last year, Norway's Ministry of Climate and Environment partnered with the Norwegian Maritime Authority to conduct a study on the pollution from shipping within the world heritage fjords.

"Most ships operating in the fjords were built before 2000 and have engines without modern technology for reducing pollution," the study noted. "This leads, among other things, to emissions of particulate matter, sulfur oxides (SOx) and nitrogen oxides (NOx)."

The study did offer up some hope, noting that the sulfur oxide emissions aren't yet large enough to exceed air quality standards. The researchers credited the development of exhaust gas cleaning systems like scrubbers and using fuel with lower sulfur contents.

There have also been a number of new technologies used to clean up fjord areas. In March, the port authority of Oslo announced they would use drones to scan the fjord's waters for garbage and other pollutants. Those drones would then send the information to an electric-powered ship to clear the garbage from the seabed.

No word yet from major cruise lines as to how they'll adjust to the change.