Snøhetta has revealed the plans, and created an accompanying website, for a large sustainable hotel which will be situated in the mountains of Norway.

Plans for an Arctic hotel are underway in Norway.

With more people in recorded history taking to the skies for business and leisure, the pressure to create a unique and impressive hotel experience is stronger than ever. 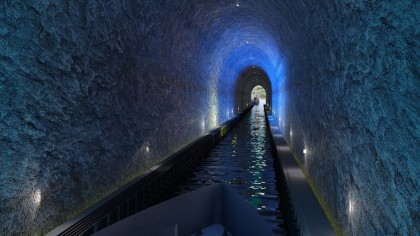 Snøhetta is rising to the occasion with the dramatic reveal of its plans to construct an energy sustainable ring-shaped hotel. The location for the future hotel alone should be enough to secure the company’s success.

They have chosen a pristine site at the base of Norway’s Almlifjellet mountain, an area that also happens to be part of the Arctic Circle. Once completed, it should offer guests some pretty up close and spectacular views of the annual Northern lights displays.

The name Svart, which translated to black in Norwegian, has been chosen for the hotel. However, because in old Norse the words for blue and black are the same, this is the first of many nature references specifically chosen for this project, perhaps to underscore even more the commitment to sustainability that underlies the project: Svartisen is the name given to two glaciers in the area.

The company has partnered with several local Norwegian firms, and together, they performed a thorough environmental impact assessment: this led to their decision to settle on a circular structure that would be fitted with solar panels on the roof.

Their main collaborator is tourism company  Arctic Adventure of Norway, or Miris Eiendom, along with construction group Skanka and architecture and engineering consultants Asplan Vaak. Because of this partnership, Snøhetta has confidently made the claim that the hotel will both offer 360° natural views, and most importantly, operate on 15% standard energy use (compared to traditional hotels).

“It was important for us to design a sustainable building that will leave a minimal environmental footprint on this beautiful northern nature.”

Kjetil Trædal Thorsen, Snøhetta's founding partner, emphasized in a statement how much attention to environmental detail was put into the planning stages of this large project: “Building in such a precious environment comes with clear obligations in terms of preserving the natural beauty and the fauna and flora of the site,” adding about the long-term impact of a hotel of this kind in the region."

Snøhetta is essentially planning an Arctic equivalent of the floating bungalow concept, in the sense that the entire hotel structure will rest on a series of weather-resistant, V-shaped wooden poles that will allow it to sit several meters above the water, in this way creating minimal impact on the surrounding Holandsfjorden fjord.

The designers also chose them because the design is reminiscent of similar poles, according to local accounts, that were used to prop up traditional fisherman houses, known as rorbues, most likely in the very same fjord that is part of the hotel site. They are considering running an eco-friendly boat shuttle for accessing the water to and from the nearby town of Bodø.

Much like the planned positioning of the future hotel, Snøhetta has set some very lofty ambitions for its environmentally-friendly hotel venture, and we believe that they have given the project the care and planning required for it to be a success after its planned opening in 2021.