Researches have developed an advanced 3D printing technique with promising biomedical uses such as the engineering of artificial arteries and organ tissues that mimic real ones.

Just on the heels of announcements of 3D printing advancements in both brain tissue and ligament creation, comes another innovation in the ever-evolving field of human organ development. University of Colorado Boulder (CU Boulder) engineers have revealed a novel 3D bioprinting method with potential biomedical applications such as the engineering of functioning artificial arteries and organ tissue.

The new process enables fine-grain localized control of an object's firmness that can see the complex geometry of specialized organ tissues, such as blood vessels, properly recreated. The outcome is artificial vessels that feature the same highly structured and yet pliable nature as the real thing!

"The idea was to add independent mechanical properties to 3D structures that can mimic the body's natural tissue," said in a statement Xiaobo Yin, an associate professor in CU Boulder's Department of Mechanical Engineering and the senior author of the study. "This technology allows us to create microstructures that can be customized for disease models." 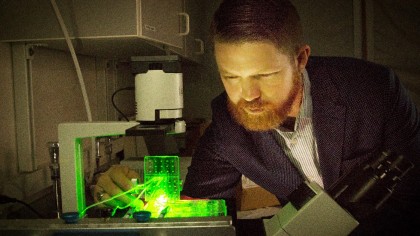 The researchers hope their innovation could one day be used for providing improved and more personalized treatment options for those suffering from a variety of vascular diseases. The approach is not entirely new.

Since hardened blood vessels have long plagued cardiovascular disease patients, viable artery and tissue replacements have long been sought. However, until now, the search has been mostly unsuccessful.

CU Boulder's team sought to tackle previous obstacles encountered in the fruitless endeavors of previous work by taking advantage of oxygen's unique effect on setting the final form of a 3D-printed structure, one that so far has been rather unwelcome. "Oxygen is usually a bad thing in that it causes incomplete curing," explained Yonghui Ding, a postdoctoral researcher in Mechanical Engineering and the lead author of the study.

However, Ding and his team adapted their process to ensure tight control over the oxygen's migration and light exposure. This led to a superior ability to direct where an object would be solidified into a harder or softer state without impacting its overall geometry.

"Here, we utilize a layer that allows a fixed rate of oxygen permeation," added Ding. "This is a profound development and an encouraging first step toward our goal of creating structures that function like a healthy cell should function."

The researchers tested their approach on several printed structures and found they could generate objects with identical shape, size, and materials but variations in rod rigidity. Even better, the printer can work with biomaterials as small as a size of 10 microns (one-tenth the width of a human hair).

Now, the team is working to further improve the bioprinter's capabilities in order to make it ideal for the needed biomedical range. "The challenge is to create an even finer scale for the chemical reactions," said Yin. "But we see tremendous opportunity ahead for this technology and the potential for artificial tissue fabrication."

The study was recently published in the journal Nature Communications.