Now A New Supercomputer That Can Mimic A Human Brain

A giant leap in the world of supercomputers.

By  Kashyap Vyas
Jan 05, 2019
The University of Manchester

We live in an age of advanced technology and engineering where anything is possible. SpiNNaker or Spiking Neural Network Architecture is a supercomputer designed in such a way that it can apparently mimic the way in which a human brain works. SpiNNaker has arrived as a major supercomputing revolution as a result of investing millions of pounds coupled with decades of work.

Decoding the history of the universe, simulating the beating of our heart or investigating the cure for certain diseases are just some of the enormous challenges a supercomputer is capable of addressing. In current times, Americans (also the first) are among the frontrunners when it comes to using supercomputers, followed closely by the Chinese.

“Anyone can build a fast CPU. The trick is to build a fast system,” so, summed up Seymour Cray. Cray is also known as the father of supercomputing and one who triumphed in the challenge of developing the most powerful computers in the world.

His Cray-1, installed in 1976, cost 8.8 million dollars and reached a record speed of 160 'megaflops' (160 million operations per second). Yes, your current 'smartphone' has nothing to envy from that huge machine as it is hundreds of times more powerful and has a memory thousands of times greater than the 8 'megabytes' of Cray-1.

However, this was the start of a whole new and compelling journey into the world of supercomputers.

When it comes to supercomputers, unity makes strength. So far, the increase in the speed of the processors (Moore's Law, which states that every 18 months, the number of transistors in an integrated circuit is doubled, is touching roof) and their coordinated work have allowed the development of these powerful machines. Supercomputers are changing the face of humanity as we know it and that too, at a rapid rate.

They are invaluable tools for weather forecasting, simulations of nuclear explosions, fluid dynamics and a full range of other applications that can potentially make the lives of humans exponentially easier. However, there are still plenty of loopholes and a lot that man does not know about the mysteries of the brain.

Talking of SpiNNaker, the ambitious project started its series of tests in the 1990s with lead researcher Steve Furber who now works in the capacity of a computer engineering professor at the University of Manchester. In his own words, "I was beginning to wonder why, with processors having got so much faster, there were things that they found hard to do which, as humans, we find relatively easy.”

However, a key challenge in building supercomputers that think like human brains lies in connectivity. Neurons in the human body that generate thousands of inputs and outputs are difficult to translate into a computing system.

In order to build a machine that can mimic the human brain, Furber and his team created a unique spiking neural network system on a chip that generates spikes to pass a signal from one node to the other, similar to the way neurons in the human brain communicate with each other. This novel architecture allows SpiNNaker to break the rules that are typically followed by traditional supercomputers, offering the potential to identify new principles of parallel computing.

SpiNNaker recently reached one million cores, making it possible to perform two trillion actions per second while modeling the action of two million neurons in real-time. This opens up new opportunities to understand how different parts of the human brain functions.

The system can also be used to predict the effects of medications on the human nervous system and improve drug effectiveness or to develop new medicines. In addition, this massively parallel supercomputer can also be useful in robotics sector.

As a matter of fact, the system is already being used in the Human Brain Project which is aimed to develop a virtual robotics environment that can be accessed collectively by hardware engineers, neuroscientists and programmers to improve our understanding about the most complex machine-human brain. 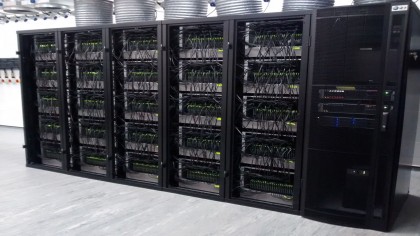 Researchers Flip the Switch on the World's Largest Neuromorphic Supercomputer

Years after the successful designing of this supercomputer, Furber shares, “SpiNNaker's extremely flexible -- all the models we use of neurons and synapses are little bits of software. If you turned those into hardware, they would be smaller and more efficient, but the reason we use software is there's no real agreement as to what the right model is, and different brain regions probably need different models, and software gives us flexibility.”

Although this brain-like computing isn't perfectly efficient to develop a robot with human-level cognition capabilities, it certainly paves the way for the development of next-generation intelligent robots and medical research.

Can AI Save Humanity From Climate Change? That's the Wrong Question