Numbers Behind the Deadly Hurricane Irma

Hurricane Irma is proving to be a powerful storm, the strongest of its kind in the history of the Atlantic Region. It is already responsible for catastrophic damage throughout the Caribbean, both in terms of infrastructure damage and loss of electricity.

Tropical storm Hurricane Irma has been widely covered for the past week and has already proven a formidable presence in the Caribbean. Local media and government agencies like the NOAA –of which the National Hurricane Center is a part—tracking the storm have been releasing copious warnings about evacuation areas. Local law enforcement and government also have been working diligently to ensure that above all, the safety of the population in affected areas is the highest priority, as many anticipate the storm touching down on the Florida coast.

From the outside, this is more or less the same protocol in the region, one in which hurricanes are common occurrences. Something about Hurricane Irma, however, is raising unique concerns, but why is this? In order to answer this question, it’s important to take a look at the science behind hurricanes.

What makes the storm so powerful?

The National Hurricane Center typically relies on the Saffir-Simpson Hurricane Wind Scale to provide general parameters about the degree of impact associated with a hurricane. The scale, which ranges from 1 to 5, is purely a tool for addressing the meteorological impact of the storm—specifically strength of sustained winds. The upper three categories are all considered to be classified as major storms. They sometimes cannot do enough for residents, however, in terms of potential evacuation efforts or giving an accurate understanding of the general level of prepardeness that is required.

Most importantly here, however, is the expected extent of damage provided in the Scale. Potential power outages run the range from a few days, up to weeks or even months, and most critically for Category 5 storms, “A high percentage of framed homes will be destroyed, with total roof failure and wall collapse.” The storm has all but leveled the island of Barbuda.

Prime Minister Gaston Browne of Antigua and Barbuda summarized powerfully the extent of the destruction on Barbuda, an island of only about 1,600 residents:

“What I saw was heart-wrenching — I mean, absolutely devastating...Hurricane Irma would have been easily the most powerful hurricane to have stormed through the Caribbean...and it is extremely unfortunate that Barbuda was right in its path.”

There are a few islands, like this one, which will essentially need to be rebuilt from scratch. The frustrating and randomness of the storm path is perhaps the most heartbreaking part of hurricanes. In Puerto Rico, one of the hardest hit areas in the last few days, there has been a 90% loss of electrity, but the main infrastructure was left more or less intact.

Thanks to radar and satellite imagery emerging in the past few days, scientists are facing a difficult reality: Hurricane Irma is the strongest hurricane in the Atlantic that has ever been recorded—the storm was upgraded from Category 4 to Category 5 in only 2 days. In its path, the storm has exceeded wind speeds of 320 km/h!

In the eye of Irma’s storm, rainfall was measured at more than 274mm per hour, with storms reaching heights exceeding 16.2km. 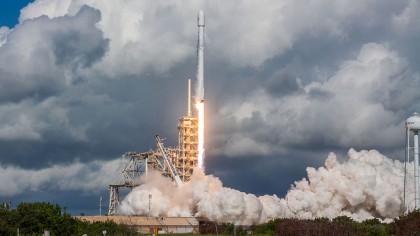 NASA satellites have captured incredible images of the eye of the storm as it passed over several Caribbean islands today and yesterday. The NHC reported Irma to be cutting its way through the Caribbean with wind speeds of roughly 26km/h exceeding 295km/h.

The path of the storm is remarkably different from the one predicted by weather forecasters, leaving many in the dark about how to best prepare. To give an idea of the confusion, the National Hurricane Center released (with information reflecting updates from Thursday at 10:00 a.m. Eastern Time) a schedule of impact of the storm based on the path of storm, and the islands already affected:

Puerto Rico and the Virgin Islands: Landfall made on Wednesday afternoon, into the evening

Haiti and the Dominican Republic: Irma is touched down on the island of Hispaniola Thursday morning

Cuba: Friday into the same evening

The Caribbean Islands of Saint-Martin and Anguilla have already taken powerful hits from the storm, just yesterday, and weather forecasters predict that the storm will arrive around the tip of the south Florida coastline in the early morning hours of Saturday, September 9th. Twitter feeds from the European Storm map team in the past three days have been full of images tracking the landmasses that have been hit by the storm.

This video was taken yesterday at St. Thomas as 180mph winds struck the USVI from Hurricane Irma! insane stuff! sorry for the confusion. pic.twitter.com/TSgbtqh1Wn

Although we are fortunate that there has been a relatively low number of fatalities, with the dizzying amount of information and updates emerging from official and unofficial sources (social media outlets), it becomes even more difficult to put together an accurate picture of the path of the storm, or even the damage. Regardless of the means by which we receive the information, what is certain is that millions are in the midst of a historical storm with a historical impact.