NVIDIA has released some seriously huge displays today at CES that will delight hardcore gaming fans. Rumours were high that Apple was set to launch the Apple TV but they have been pipped at the post by NVIDIA’s announcement of its 65-inch 4K HDR "Big Format Gaming Displays" (BFGDs). The displays are packed with embedded technology including NVIDIA's G-SYNC technology, which eliminates screen tearing and built-in Shield functionality.

The integrated NVIDIA Shield means that when you aren’t gaming you are able to use the Shield technology to stream TV and watch movies. The Shield functionality which was previously only available as a separate box optimizes the display for broader application. Shield lets you stream Amazon, HBO, Hulu, Netflix, YouTube and many other popular channels.

Shield also gives its users access to Android games as well as exclusive conversions of classic games such as Metal Gear Solid 2 and 3. Shield also turns your display into a digital personal assistant with the integration of NVIDIA's Smart Home technologies. This allows you to use your voice to ask Shield to play music, order shopping, or ask Google. All of these great Shield integrations mean the displays could really be a serious option for swapping out your TV.

Displays made with unusual collaboration between tech giants

The screens come courtesy of a collaboration between NVIDIA, ASUS, Acer and HP to build the displays. The displays which are primarily aimed at gamers have 120Hz refresh rates, a peak brightness of 1,000 nits, full-array backlighting, and full DCI-P3 color gamut support. Currently, most gamers who are looking to play with supersize screens use TVs but these miss vital technology support like G-SYNC, which smoothes out game performance.

Other displays use various processes to playback 24 FPS movies and videos at 60 Hz, which may result in noticeable judder and blurriness in scenes with swiftly moving action. The new BFGDs bring a home cinema type quality to a home gaming setup.

NVIDIA will lead the market 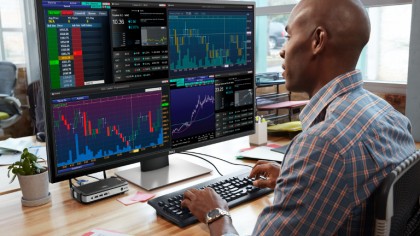 NVIDIA summarize their new display by saying; “In conclusion, new Big Format Gaming Displays deliver an unmatched PC gaming experience for enthusiasts, with the world’s first 65" PC gaming panel, which supports 4K gaming at up to 120Hz, at ultra-low latencies, with G-SYNC and best-in-class HDR with 1000 nit peak brightness. And when you finally stop playing PC games for the day you’ll receive a fantastic experience playing NVIDIA SHIELD games, streaming content, using Plex and Kodi, watching movies and TV shows, playing on consoles, and watching live-streamed TV.” The super impressive screens are wowing audiences at CES 2018 but like most big announcements, more information about the specs and pricing are yet to be announced. NVIDIA says that the screens will likely hit the stores in the summer.