New York City recently released a report on the long term costs of its electric vehicle fleet, showing a dramatic reduction in operating expenses for the city.

In a recent newsletter, the New York City Department of Citywide Administrative Services (DCAS) announced that they have achieved considerable savings after they started switching their fleet over to electric vehicles (EV) as part of the city’s NYC Clean Fleet initiative, which aims to cut the greenhouse gas emissions of NYC Fleet (NYCF) 50% by 2025.

According to [PDF] Keith Kerman, the Deputy Commissioner and Chief Fleet Officer for DCAS, “NYC Fleet has more experience with electric vehicles than most, so we took a look at last year’s maintenance costs with the DCAS client fleet to see if these service benefits are materializing.

“Right now, servicing costs with our all-electric vehicle models is dramatically less than with gas, hybrid, or hybrid plug-in models. In general, our hybrid models also achieve benefits from gas models, though the most dramatic results in this report are with the all electrics.”

While the sticker price on many electric vehicles has historically been greater than their gas-powered counterparts, this is less and less the case every year, so the cost savings to be gained from fuel costs and vehicle maintenance are substantial.

“Our electric vehicles have not yet completed a full life cycle of ten or so years, so we will keep monitoring and reporting on maintenance performance. All early indicators are that we are achieving the fuel, emissions, and maintenance benefits of this exciting transition away from the internal combustion engine,” Kerman said.

DCAS has committed to putting at least 2,000 plug-in EVs into service by 2025, and as of January 2019, they had 1,756 EVs on the road, with another 163 on order. As such, they have one of the largest fleets on which they can gather actual real-world data on the performance of an EV fleet of vehicles.

According to their most recent newsletter, the average maintenance costs for EVs is considerably less than what they pay for gas-powered vehicles (GPV). This is mostly due to far, far fewer moving parts in an EV as opposed to a GPV—an electric motor has one moving part, while the internal combustion engine has dozens—and the elimination of entire systems required to operate a GPV, such as the exhaust system for the engine.

“For all-electric vehicles, the oil change, spark plug, and air filter replacement are things of the past. You won’t need to get your transmission serviced or worry about your muffler or catalytic converter needing repairs or being stolen, an issue our fleet is dealing with now on gas and hybrid cars,” said Kerman.

The numbers for the Chevy Bolt and the Nissan Leaf are even more dramatic. NYCF operates 93 and 149 of these vehicles, respectively, and their respective maintenance costs were only $204.86 and $344.14.

NYC Is Going All In On Electric Vehicles, Others Sure To Follow

When we think EVs, we tend to think about sedans and other passenger vehicles, but some of the biggest polluters are commercial and industrial vehicles.

Here, DCAS hopes to see more savings in the future as well. In addition to their passenger vehicles used by city agencies, NYCF is planning to expand to other types of vehicles as soon as possible.

“For truck operations, there is reduced belt reliance and the removal of vacuum lines. Most importantly for maintenance costs would be the elimination of costly and difficult-to-maintain diesel particulate emissions reduction systems, called DPFs. In fact, vehicle emissions tests themselves become unnecessary with electric vehicles,” Kerman said. 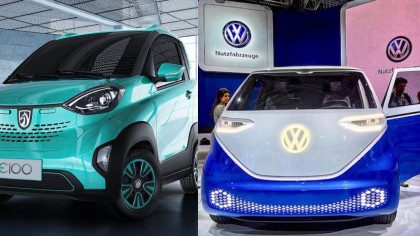 Last year, DCAS registered its first-ever mini-van EV contract and is looking into options for plug-in SUVs. “We will be looking to bid plug-in pick-ups and vans by next year, as market options expand,” according to Kerman.

DCAS is also expanding its electric vehicle infrastructure to accommodate this future expansion. According to DCAS’s January 18 NYC Fleet Newsletter, “[NYC Fleet] continues to expand its charging infrastructure to support this growing universe of EVs. We now operate 547 total fleet chargers including 53 solar carports. By 2020, we will operate at least 700 charging locations, with 87 solar carports. This will include our first fast chargers.”

While NYC clearly has the money, tax-base, and a position strong enough to take on such a dramatic transition, by detailing their data and moving as aggressively as they are, they’re showing other state and local governments around the country the kinds of cost savings that are possible by transitioning to EV vehicle fleets. This is something that cash-strapped governments everywhere are going to notice when planning for their future.