An observation campaign led by ESO has finally produced proof of Einstein's gravity principals in the extreme environment of a supermassive black hole.

This time the effects of the famed scientist's principles were witnessed on the motion of a star passing through the supermassive black hole in the center of the Milky Way.

The discovery announced today is the very exciting result of a remarkable partnership between ESO, Member States and host country, as well as between scientists across the globe. #ESOlive https://t.co/S0igZZyrgQ

The international team of astronomers used ESO's advanced equipment to follow a star called S2, one of the stars surrounding the closest supermassive black hole to the Earth. The black hole's exorbitantly large nature provides an environment with the strongest gravitational field in our galaxy. 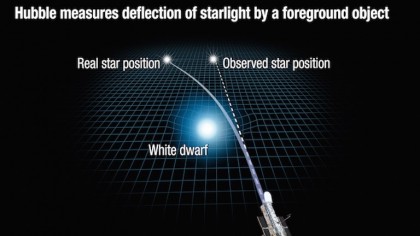 In May 2018, S2 came to the closest point to the black hole at a distance of less than 20 billion kilometers. The team compared S2's position and velocity measurements to previous observations and found the results to be in agreement with Einstein's gravity predictions.

“This is the second time that we have observed the close passage of S2 around the black hole in our galactic centre. But this time, because of much improved instrumentation, we were able to observe the star with unprecedented resolution,” explained in a statement Reinhard Genzel of the Max Planck Institute for Extraterrestrial Physics (MPE) in Garching, Germany, the leader of ESO's international team.

“We have been preparing intensely for this event over several years, as we wanted to make the most of this unique opportunity to observe general relativistic effects," added Genzel. Genzel led a team that included collaborators worldwide from the Paris Observatory–PSL, the Université Grenoble Alpes, CNRS, the Max Planck Institute for Astronomy, the University of Cologne, the Portuguese CENTRA – Centro de Astroﬁsica e Gravitação and ESO.

A first time observation in a black hole

The event marks the first time that the theory has been observed in the motion of a star around a supermassive black hole. The extreme nature of the black hole's gravitational pull shows that Einstein's equations of general relativity remain true in even the most diverse of celestial scenarios.

“Here in the Solar System we can only test the laws of physics now and under certain circumstances. So it’s very important in astronomy to also check that those laws are still valid where the gravitational fields are very much stronger," said Françoise Delplancke, head of the System Engineering Department at ESO.

The team is continuing its observations and following S2 as the star now moves away from the black hole. These new results are expected to prove another relativistic effect known as Schwarzschild precession, an external gravitational field associated with a stationary planetary body.

ESO held a Reddit discussion regarding the new discovery.

Yesterday we participated in a @RedditAskSci #AMA session regarding this result: https://t.co/HzSsrg79WI
If you want to read the questions & answers head over to https://t.co/B2xHxKR2gJ

Primordial Mega-Stars May Have Seeded the First Supermassive Black Holes