Plans are underway to expand a large solar plant in an oilfield in Oman, which should prove to galvanize the country’s economy.

It looks like solar thermal energy is in the works for Oman. Work on the first of a planned seven blocks of the 1,021 megawatt solar plant, named Miraah, recently wrapped up. The company estimates that the plant could usher in a massive annual carbon dioxide emissions reduction of 300,000 metric tons. The firm GlassPoint, behind Miraah, will partner with Petroleum Development Oman (PDO) on the large project.

The plant will eventually consist of 36 blocks, structures which resemble greenhouses and are all equipped with solar arrays that offer protection from the elements faced in the arid country, such as strong winds and dust storms.

GlassPoint explains environmental benefits the plant will provide, in addition to improving overall efficiency in energy production: “The greenhouse enables major cost and performance advantages compared to exposed solar designs, from reducing overall material usage to automated washing operations.” Also, large mirrors that are placed throughout the greenhouses will boil the water from the oilfield, creating solar steam. GlassPoint projects that the plant will eventually be able to supply 6,000 tons of solar steam daily to the oilfields.

This is not all, however. The steam will also be employed as a cleaner, more eco-friendly means of oil extraction, according to a statement from GlassPoint. The process is called thermal enhanced oil recovery (EOR) and involves steam being injected into the oil reservoir, which in turn heats the oil, allowing it to pumped to the surface much more easily.

PDO Managing Director Raoul Restucci expressed his optimism about the project: “The safe and successful delivery of solar steam into our network at Amal is a significant milestone for the Miraah project and a major step towards transforming the energy landscape in Oman.”

Although the idea of combining solar energy technology with oil production may seem a bit counterintuitive, or even contradictory, Miraah is focused on the idea that the plant will reduce the amount of natural gas which is currently being used to produced steam, by estimates of 5.6 trillion British thermal units (BTUs) annually. 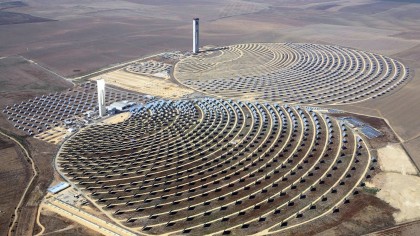 “Solar-powered oil production is a sustainable, long-term solution to meet the Sultanate’s future energy demand and utilise its natural resources most efficiently... Miraah is a real statement of intent from PDO as we begin the transition away from an exclusive focus on oil and gas to becoming a fully-fledged energy company with a greater focus on renewables.”

Construction on the project began back in October 2015, and though output has been relatively modest up until now, PDO has high hopes that the project will have major impacts in many areas of the economy, providing a boost in areas from manufacturing, training and employment, to supply chain development: “This project is helping put Oman on the global solar energy map, creating new jobs and developing expertise in solar technology innovation, project deployment and manufacturing.” What we are witnessing here is the transformative power that responsibly developed technology can have in a country.