One Year After Launch, Checking in on SpaceX's Starman

A year ago today, SpaceX's Falcon Heavy rocket put Starman into space. We check up on how he's doing.

A year ago today, SpaceX successfully tested its massive Falcon Heavy rocket system for the first time and celebrated their success by sending a Tesla Roadster, with a space suit wearing mannequin dubbed Starman, into orbit around the Sun.

As of this writing, Starman is somewhere just beyond the orbit of Mars, about 226,563,000 miles from Earth in an elliptical orbit around the Sun, which it is racing towards at nearly 10,000 mph, according to whereisroadster.com which tracks Starman’s location.

To put this in perspective, the car's warranty is for 36,000 miles, which Starman has exceeded by 13,183 times, or enough to drive over all of the world’s roads 21 times. 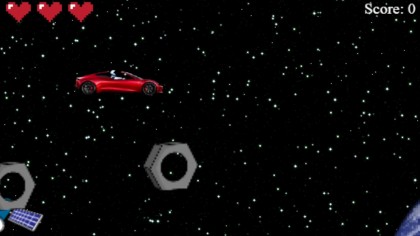 If you’ve ever gotten sick of hearing the same song over and over again on the radio, imagine Starman’s pain, he’s been listening to the same two songs ever since he hit the star road. He’s listened to the David Bowie songs, Space Oddity and Is There Life on Mars, 99,519 times and 134,098 times, respectively.

Oh, and they’re playing at the same time, one song for each ear. Yes, that does remind me of the earworm scene from Star Trek II: The Wrath of Khan, how did you know?

Its orbit around the sun will take about 557 days, and its expected to go for millions of years before eventually hitting Earth or Venus. The odds of it hitting Earth sometime in the next million years is about 6%, according to a Space.com review of a study last year by researchers at the University of Toronto. They said Venus had a 2.5% chance of being hit in the same time frame.

They also found that Starman will make a pretty close fly-by of Earth in 2091 when it will come as close as a few hundred thousand kilometers to the Earth.

Mild to Severe Wear and Tear to Be Expected

All of this is, of course, assuming that any bit of him is still in one piece. The battery is probably dead by now if he's been listening to music this whole time. In which case he’d be alone with his thoughts, unless micro-debris has torn the mannequin's head off and ripped the Roadster to shreds.

Space is full of all sorts of debris too small for us to see, but which will be traveling relatively fast as it orbits the sun. Smack into some of this debris and, depending on the relative speeds between Starman and whatever it hits, a small boulder could deliver a devastating hit to the vehicle or mannequin.

Aside from the debris, Starman is now well outside of Earth’s magnetic field, so the Starman and his Roadster are being slowly stripped clean by the solar winds and radiation, so that lovely cherry red exterior on the roadster has long a bit of its shine over the past year.

When he gets close enough to Earth for us to have a good look at him again in 2091, there probably won’t be much left of him besides the frame of the vehicle, but you know what they say, live fast, die hard. For Starman, it'll have been a hell of a ride.