A stunning panorama of Mars is the perfect tribute to Opportunity's hard work.

NASA’s Mars Rover Opportunity was officially announced out of service last month, but it sent a spectacular parting gift. NASA has just released the Rover’s final panorama, and its highly memorable Opportunity spent its final active month in Endeavour Crater, in a place known as Perseverance Valley.

The long-serving Rover captured multiple images of its surroundings to create a series of panoramas. It used a Pancam, which captures pictures through a series of blue, green and deep red (near-infrared) filter. For its final panorama Opportunity took 354 snaps of the area, managing to capture the broad landscape of the valley, glimpses of itself and even its own tracks into the area.

The false color image is a beautiful representation of the red planet. For science and space nerds, Opportunity’s last shot will hold a special moment in history. The robust rover lasted far longer than its engineers ever expected, and its work is a testimony to the quality of its NASA engineers.

A flat true color image can be viewed on the NASA website here. Four weeks ago at a special press conference, NASA officially declared the Opportunity mission over after dust covered the over causing it solar panels which powered it.

With that, the Mars Opportunity Rover was officially declared dead, its nearly 15 years of service on Mars, on Sol 5352—the number of days Opportunity spent on Mars—came to an end. Opportunity out-did every expectation of it.

Scientists thought it wouldn’t travel more than a kilometer from its landing spot, but instead, the adventurous little robot traveled to distant parts of Mars, even climbing up a gravel-strewn slope as steep as 32-degrees, thereby setting an off-world record.

It outlived its original mission life expectancy 60 times over. Its end came in the form of a historic dust storm in June 2018. The storm lasted weeks and kicked up so much dust the Rover’s systems became completely dysfunctional.

John Callas, manager of the MER project, said in a statement that “we have made every reasonable engineering effort to try to recover Opportunity and have determined that the likelihood of receiving a signal is far too low to continue recovery efforts." NASA made one final ditch to communicate with Opportunity, playing the Billie Holiday song, “I’ll be Seeing You.” 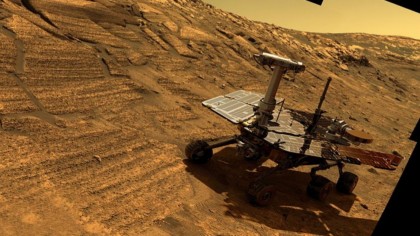 The end of the Opportunity Mission was a sad day for science, but for many at NASA it was very personal. “When Opportunity landed back in 2004, I was actually in high school," said MER deputy project scientist Abigail Fraeman.

"I was a high school junior, but I had the amazing opportunity to come to JPL and actually be here when the rovers landed."