The Oresund Bridge connects Denmark and Sweden in a unique cable-stayed bridge to sunken tunnel road and railway system, including an artificial island.

Connecting Denmark and Sweden, the Øresund Bridge is incredibly unique and well engineered. The combined roadway and rail line bridge run nearly 8 km where it then transitions into an underwater tunnel for the remaining 4 km.

Open since July 2000, the motorway also carries a large data cable essential to internet connectivity throughout Europe. In fact, the bridge is the longest road and rail bridge in the European continent winning several designs and engineering awards.

At first, one may wonder why the tunnel connected through a 2 square km artificial island was necessary, but it was a very essential design choice. Engineers and architects approached the construction of the bridge with several very daunting constraints.

The bridge had to be tall enough and wide enough to let large shipping traffic through the busy channel. In addition to this, the nearby Copenhagen airport required that there be sufficient air clearance for flight traffic. The fear of an airplane crashing into a support tower of the bridge is what drove the designers to construct a sunken tunnel.

Danish engineering firm COWI and architect George K.S. Rotne were the main designers and planners for the project.

A design competition was held in order to determine how the bridge and tunnel structure would be built. Of the designs, what would have been the world's largest arch bridge was proposed, but fears of ship collisions kept engineers from moving forward.

The bridge needed to carry rail lines under the road, and trains don't function well with heavy movements, like what would be present with a traditional large cable suspension bridge. 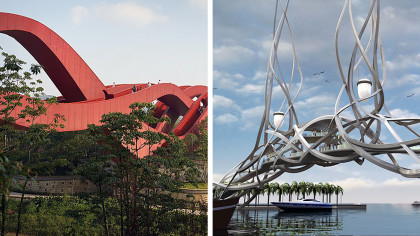 Because of the need for rigidity as well as clearance and span requirements, a cable-stayed design was selected for the main span. A cable-stayed bridge transfers support through individual cables back to the main tower structure, decreasing movement.

Engineers decided to leave the top of each support disconnected from its pair in order to decrease damage in the event of a plane crash. Essentially, if a plane crashed into one tower, the other tower may be able to support the bridge instead of both collapsing.

The Øresund Bridge construction was a feat on its own, but a tunnel still needed to be constructed to complete the roadway.

There was one slight problem, no island existed to offer a transition point for the road. In a massive undertaking, rock and soil were dredged from the sea floor and built up to create the artificial island named Peberholm.

Due to the material of the sea floor, a drilled tunnel was not a possible design consideration, so engineers chose to sink and connect 55 million kilogram tunnel segments resting on a prepared sea floor. Each segment was sealed shut and using a specially designed barge along with 7 tugboats, the segments were dropped into place.

A layout of the tunnel structure can be seen below.

The final structure was completed at an estimated cost of US$4.5 Billion with major improvements planned for the future. As the users must pay a toll to cross the bridge, the roadway is expected to pay for itself in 30 years from completion.

Almost all of the bridge and tunnel structures were built on land and carried out to sea on customized barges. The foundations which the 4 main support towers were placed upon were poured in sections using independent rigs.

It is also required that daily inspections and maintenance be carried out on the bridge structures, for which there's a specially designed motorized gantry, placed under the railway. This gantry is a Swiss Army Knife of maintenance tools, even including a large hydraulic arm that can extend to the road's surface.

One of the most unique feature of this platform is its ability to move the whole length of the roadway, with the capability of turning in order to fit between support structures.

During construction, major care was taken not to stir up dust plumes which would kill the surrounding environment.

In fact, the artificial island and surrounding ecosystem have become a haven for biologists, becoming home to over 500 species of plants. The sheer size of the project, of course, had large environmental impacts, but this is natural during similar public projects.

While not new, the project is still a marvel of engineering, being one of 8 bridge-to-tunnel projects in the entire world. What sets this project apart is how much of the design, while artistically beautiful, was driven out of the need for innovative engineering.