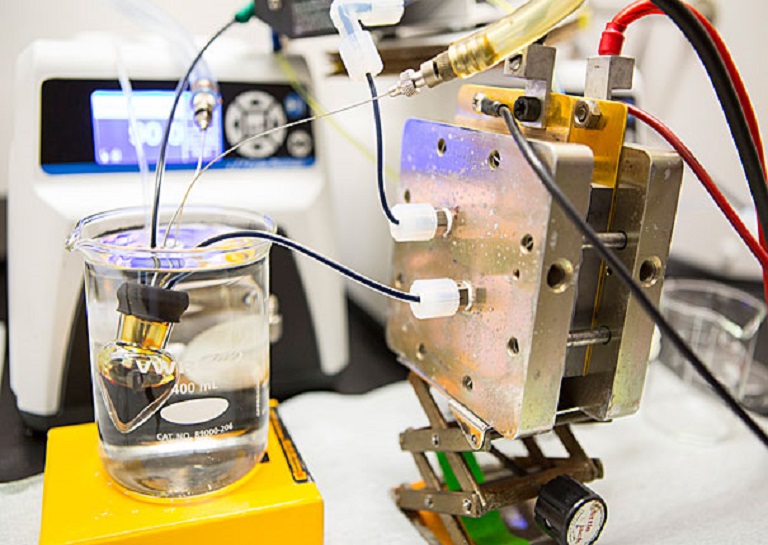 Recently, a Harvard team reported in a paper published in Nature, a new, innovative large-scale battery that could fundamentally alter the foundation of energy storage.

The device reported is a metal-free flow battery that functions based on the electrochemistry of small organic molecules that are both abundant and inexpensive. The carbon-based molecules, otherwise called quinones, can be used to store energy much in the same way that plants and animals use similar molecules to store energy. The molecule is almost identical to similar energy store molecules utilized within rhubarb.

A systematic problem with renewable energy is the inconsistency of weather that provides sub-optimal environments for energy production, rendering the resources as unreliable and inconsistent. During down-times, minimal amounts of electricity are produced, with no current backup mechanism that ensures a consistent supply of electricity. However, thanks to the research team at Harvard, they may have solved  renewable energy shortcomings by developing a massive, economically viable battery.

The batteries were built and successfully tested at the Harvard School of Engineering and Applied Sciences. Over 10,000 quinone molecules were screened to determine the optimal candidate to base the battery upon. The selected molecules are stored in solution within massive external tanks with size being directly proportional to energy storage capacity.  After over 100 charging cycles, no significant degradation was noted. However, much more testing will be required to be able to sustain the thousands of charging cycles large industrial units will need to maintain.

The molecule was developed with inspiration derived from vitamin B2, which mammals utilize to store energy from food within the body.

“With only a couple of tweaks to the original B2 molecule, this new group of molecules becomes a good candidate for alkaline flow batteries"

"They have high stability and solubility and provide high battery voltage and storage capacity. Because vitamins are remarkably easy to make, this molecule could be manufactured on a large scale at a very low cost.”

“We designed these molecules to suit the needs of our battery, but really it was nature that hinted at this way to store energy,”

Although previous flow batteries have been utilized in small scale, the solution required is often comprised of expensive and difficult to maintain fluid, making the battery not economically viable. However, the new research suggests the new molecule is capable of high-performance, able to store immense amounts of energy similar to the mechanism used within living organisms. Better still, the compounds required are incredibly cheap and non-toxic to produce, bringing the reality of flow batteries much closer than ever anticipated.

“The whole world of electricity storage has been using metal ions in various charge states but there is a limited number that you can put into solution and use to store energy, and none of them can economically store massive amounts of renewable energy,”

“With organic molecules, we introduce a vast new set of possibilities. Some of them will be terrible and some will be really good. With these quinones we have the first ones that look really good.”

Currently, the team is working on developing storage tanks to work beside and in unison with current renewable energy providers. However, the team is also looking provide batteries for non-commercial use as well.

“Imagine a device the size of a home heating oil tank sitting in your basement. It would store a day’s worth of sunshine from the solar panels on the roof of your house, potentially providing enough to power your household from late afternoon, through the night, into the next morning, without burning any fossil fuels.”

Says Marshak, another collaborator of the project.

The project is currently undergoing a three-year development period in collaboration with Sustainable Innovations, LLC. The team hopes to soon release a functional device the size of a horse trailer. The proposed system will be a portable unit, able to connect to solar panels on roofs of buildings. With support by U.S. Department of Energy’s Advanced Research Project Agency–Energy (ARPA-E), and a few other backers, perhaps the renewable, sustainable age of energy use and storage is upon us, promising a brighter future for tomorrow.

How Companies are Grappling with the Future of Renewable Energy

IBM's New Battery Is Free of Heavy Metals, Much Better for Environment