Space junk poses a threat to active satellites, spacecraft, and even astronauts.

Space junk is a growing problem, and an issue that could go eventually jeopardize space travel if not correctly handled. If we have learned anything over the past decade, it is that humans continue to be eager to get into space. Private and government-funded organizations are planning to expand our presence in space, build bases, and even have plans for livable habitats within the next few decades. However, for us to reach Mars and beyond, we first need to be able to get off this planet safely.

However, there are more immediate dangers. The space debris floating around the planet could threaten the lives of astronauts on the International Space Station. And, it is not just the big pieces of junk we have to worry about. 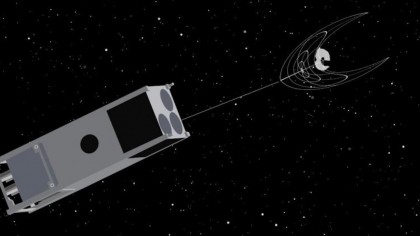 Tiny CubeSat on a Mission to Clean up Space Junk

According to senior NASA scientist Jack Bacon, the collision of a piece of aluminum with a piece of space debris roughly the size of about 10-centimeters would be the equivalent to detonating 7 kilograms of TNT. Properly tackling this problem will not be easy. Today we are going to explore everything you need to know about space debris and what organizations are doing to track and manage the situation.

As described by Agnieszka Gautier in an article for NASA, “The remains of these communication satellites, along with sixty years of space activity, have littered outer space. An orchestra of objects swirls in various orbits: decommissioned satellites, burnt-out rocket stages, lost tools, and fragmented particles from explosions and collisions. When tiny flecks of paint travel with enough force to cut cables, damage space shuttle windows, or kill astronauts, accurately tracking debris matters.”

As one can imagine, our space junk problem all started at the beginning of the space race between the Soviet Union and the United States. When the Soviet Union launched the first satellite in history into orbit around the Earth, the beach ball-sized craft sparked a race to the stars that would eventually create new space programs around the world.

Over the decades, companies and governments have developed satellites for military defense, cell phones, television, and GPS, launching hundreds of them into space each year. In fact, much of the debris in space consists of pieces of old rockets. You can find nuts and bolts, garbage bags, a lens cap, a screwdriver, and even a spatula, if you look hard enough. So if you were to go junk collecting in space, what would you find?

There are some odd objects floating around our planet

Let’s start with some of the more common objects that you might find floating around the planet. NASA’s Orbital Debris Space Program Office lists the types of space junk found in orbit, and is constantly monitoring them as the amount of space junk continues to increase each year. The first thing you might find in our space junkyard are stages from rockets and old satellites that no longer work.

Going out to retrieve these larger pieces of debris is expensive and not practical. The sad reality is that when parts of a spacecraft falls off, they end up floating around the planet until they fall back to earth or collide with another piece of space junk.

You might even come across tiny bits of paint. In fact, there are millions of pieces of paint that have flaked off of other pieces of space junk, or even spacecraft, and they are growing exponentially. As mentioned above, even these little pieces of junk can pose a serious threat to astronauts. But wait, there's more.

While out in space, junk scavenging, you might come across the occasional upper stages of launch vehicles and even solid rocket motor effluent. However, people there are even weirder pieces of space junk floating around, including gloves, tanks of ammonia, pee, and Gene Roddenberry's ashes.

How are we keeping track of all that junk?

The NASA Orbital Debris Program Office is currently the leading program monitoring the space debris currently orbiting our planet. The team is constantly collaborating with other governments and private institutions to gain a better scope of the issue, but the Orbital Debris Program Office is also hard at work coming up with creative solutions for potentially removing the space debris. As described by NASA, “The OPDO, has taken the international lead in conducting measurements of the orbital environment and in developing the technical consensus for adopting mitigation measures to protect the users within it."

“Located at the Johnson Space Center, the Office continues to develop an improved understanding of the orbital debris environment and measures that can be taken to control debris growth. Explore Orbital Debris.” The OPDO is tracking, detecting, and archiving space junk using a large collection of global telescopes. The OPDO is even able to track objects as small as 0.12 inches using ground-based radars. Space debris around the size of 10 inches are cataloged consistently and monitored diligently.

However, it is not just one organization's or country's responsibility. “Space junk is not one country’s responsibility, but the responsibility of every spacefaring country. The problem of managing space debris is both an international challenge and an opportunity to preserve the space environment for future space exploration missions," says NASA

Can we stop making the problem worse?

Yes, but not anytime soon. First and foremost, you might think the simple solution is to develop a more effective and junkless process of launching objects into space. There are private companies and institutions doing just that, but it could be decades before we make any commercially viable progress. Even more so, if we stopped launching objects into space, things would get worse. Pieces of space junk collide with each other on a regular basis, multiplying the problem.

“It is well understood that we are past the point of no return. Relying solely on improved tracking and avoidance is not enough … it is simply a technical form of sticking your head in the sand and crossing your fingers,”  Texas A&M Ph.D. student Jonathan Missel told SPACE.com. “We are at a point where the problem needs to be solved, with active removal, not just avoided.”

Computer simulations completed by OPDO have shed some light on this problem and how things could get dramatically worse. One simulation, covering a 200-year time period, showcased how debris larger than about 20 cm across will increase by 1.5 times, while space debris 10-20 cm can be expected to multiply 3.2 times, and debris less than 10 cm will grow a factor of 13 to 20. In addition, we will consistently be launching spacecraft and satellites in the coming years. The good news is that NASA, alongside other organizations from around the world, are developing a series of potential solutions that could make a dent in the space junk problem.

There are some potential solutions out there

The Space Junk Slingshot - This project is the brainchild of the engineering minds at Texas A&M University. The simple, cheap but ingenious project would be able to fly from one piece of space junk to another using little fuel. Dubbed the Sling-Sat Space Sweeper, it would capture various objects, swinging them towards Earth’s atmosphere, and using the momentum generated to move on to the next group of debris.

The Space Debris Elimination system - Developed by Raytheon BBN Technologies, this NASA funded project would fire targeted puffs of air into lower orbit and into the paths of unsuspecting space trash. This process increases the drag of the space junk, causing it to de-orbit. According to Dan Gregory of Raytheon BBN, "The air pulse creates a cloud that impacts any piece of debris that flies through while the cloud is still coherent. In other words, it depends on how much debris flies through the cloud you create while that cloud is still intact."

Go Space Junk Fishing - First conceived in 2014, the e.DeOrbit's mission would go out hunting for space junk lying in a polar orbit and at an altitude between 800 and 1,000 kilometers. Various means of capturing the junk have been propsed, including the use of harpoons, magnets, massive nets, robotic arms, and even tentacles.

Sail it away - This project is fairly straightforward. The British-proposed CubeSail would utilize the power of drag to push orbiting space debris down to lower orbits. Solar sails are garnering a lot of attention beyond just debris collection, with researchers looking at using them for interplanetary travel.

Humans have big plans of reaching beyond Earth to the Moon, and other planets. New space stations will make their way into orbit into our orbit in the near future. In order for humans to reach their space goals safely in the near future, we will need to keep a close eye on space junk. Poet S. Thuy Nguyen-Onstott summed this up perfectly, writing:

"The Universe is infinite

But space has its limits

Oh what a waste

Then comes Kessler Who knows the better

Their debris do multiply

We look for ways

To manage the spray"

Do you think humans should be worried about space debris? What solutions have caught your attention?