Out of This World Tech: The Exciting Role of 3D Printing in the Aerospace Industry

Since 1989, the aerospace industry has benefited from 3D printing. Here is how things are changing today.

If you have learned anything over the past couple of weeks, it is that 3D printing is disrupting just about every industry across the globe. 3D printing has gone on to change the way we design and produce clothing. It is changing how cars are manufactured and delivered, and it has even made its way into some of our kitchens. You probably also have an FDM printer sitting on your desk at home.

As you can tell, we are excited to see so many different companies across the industry embrace additive manufacturing. However, one industry is likely to benefit from 3D manufacturing, helping humans travel from country to country, to the moon, and beyond. You probably guessed it, the aerospace industry.

Taking 3D printing above and beyond

The aerospace industry has benefited from 3D printing as early as 1989, with the adoption of the emerging technology gaining steam over the next couple of decades. 3D printing in the aerospace industry may not be as flashy or talked about as footwear or car manufacturing, yet the changes brought about by the emerging technology could eventually help our species colonize new planets. But, we are getting ahead of ourselves.

Like many other industries, 3D printing is appealing because it allows companies to prototype ideas quickly, or create fully functioning parts at a fraction of the cost and in far less time than standard manufacturing methods. Hyper-customization will enable engineers to print parts on demand to fit any potential design challenge or repair job. In short, the opportunity to produce expensive parts lighter, more reliable, and faster than ever before is too good of an opportunity to pass-up in the aerospace industry. 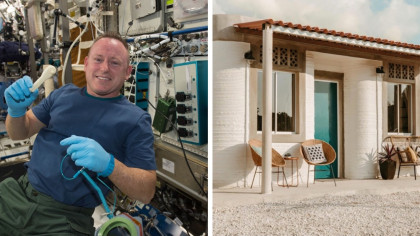 We could have 3D printed rockets take humans to Mars.

If you do own an FDM 3D printer, you have probably spent countless hours 3D printing various objects, maybe even a few backyard rockets? Your standard FDM printer uses a thermoplastic material that is melted upon contact of the printer's nozzle, cooling instantly upon hitting the given printing surface. However, what you may not know is that you can print various materials, including metal. The additive manufacturing of metals is a technology that has tremendously matured over the years. The production of expensive metallic components and assemblies are very attractive to space programs at NASA and private organizations like SpaceX or Virgin Orbit.

Using an additive copper alloy, known as GRCop-84, created by Marshall and Glenn in 2014, as well as Virgin Orbit's hybrid additive/subtractive machine to apply a second bimetallic super-alloy jacket, the collaborative team was able to successfully test the combustion chamber. To do so, they used high-pressure liquid oxygen/kerosene propellants. It was impressive. The combustion chamber delivered more than 2,000 pounds of thrust successfully in nearly two-dozen, 60-second test firings.

Paul Gradl, NASA senior engineer, expressed his excitement for the project stating, "Traditionally, it takes many months to manufacture, test and deliver a conventional combustion chamber. We can reduce that time considerably."

"Additive manufacturing is primed to augment and enhance traditional processes. It provides new design and performance opportunities and yields a highly durable piece of hardware – and with this partnership, we're advancing that capability even further."

In the not so far off future, engines produced via the process of additive manufacturing could take us to Mars and further.

Commercial planes are starting to use 3D printed parts.

Don't worry. No one is 3D printing low-quality FDM parts and putting them on a plane to save money. Nevertheless, industrial high-end 3D manufactured parts have already made their way onto a few commercial planes, and for a good reason. According to EOS, 3D printing can be used to reduce the weight of some aircraft as much as 40-60%, and that is just the beginning. In fact, a single component designed and manufactured with 3D printing could reduce air drag by 2.1%, which in turn reduces fuel costs by 5.41%. Airbus has taken notice, fitting their A350 XWB aircraft with over 1,000+ 3D printed parts.

Even more so, just like in other areas of the aerospace industry, additive manufacturing allows companies like Boeing and Airbus to speed up production. One of the biggest challenges in this industry is filling all of the necessary orders of commercial planes, with both companies having 5,000-8,000 planes backlogged annually. With demand expected only to increase over the coming years, additive manufacturing may prove to be a Godsend. It has been estimated that Boeing, so far, has used 60,000 parts for its planes.

Satellites can be costly. However,  as you probably guessed, additive manufacturing is here to fix that. Engineers at the Defense and Space division at Airbus used 3D printing to create a titanium frame able to withstand temperature ranges of -170 to 100 degrees celsius. Thanks to the power of additive manufacturing, the team was able to reduce production costs by as much as 20%, creating a lighter and geometrically optimized product compared to previous iterations of the satellite.

Our friends at the start-up Stratodyne LLC, are also making waves in the aerospace industry. The Midwest team utilizes rapid-prototyping methods with their filament to create bespoke stratospheric satellites that can be deployed in as little as a few hours in close proximity to their targeted location. The satellites can provide everything from asset monitoring to scientific measurements. These cheap, sustainable alternatives to satellites are even able to be used for telecommunications, remote sensing, or geospatial data collection.

As described by the Statodyne team LLC, "Unlike conventional satellites which require months of testing, millions of dollars, and weeks to achieve orbit over the desired location, our StratoSats can be deployed in less than a day for only a tiny amount of the cost."

"Conventional satellites become hazardous space junk after their service life is used up or cause the release of hundreds of tons of greenhouse gases during their launch, but our StratoSats can be returned to the ground and be relaunched for new missions, leaving virtually no ecological footprint on our planet or beyond."

Planning what to bring on your next one week vacation is stressful. Imagine trying to plan out the logistics for a trip in uncharted territory, in which the journey itself would take 6-8 months. This is the current reality for those organizations out there trying to get us to Mars. Let's put some things into perspective. According to NASA, to facilitate the lives of the astronauts living on the International Space Station, which is only about 400 kilometers above the Earth, annually the ISS needs to be provided with 3175 kilos of spare parts, 13,154 kilos of spaceflight hardware spares, and another 17,690 kilos of spares ready to go at any minute.

The International Space Station's proximity to our planet makes this all feasible. However, this is not practical or even that realistic on trips into the Moon and Mars. Also, if you were able to pack up a large spacecraft with enough supplies, it would be extraordinarily costly and far from efficient. Yet, this is where 3D printing can come to the rescue.

NASA's In-Space Manufacturing, or ISM, at the NASA Marshall Space Flight Center, is currently investigating ways 3D printing technology could very literally lighten the load of mission in space. ISM partners like Made in Space have developed fused filament fabrication 3D techniques. This process involves feeding a continuous thread of plastic through a heated extruder and onto a tray layer by layer to create a three-dimensional object. Currently, there is research exploring the most effective methods of 3D printing in space, allowing astronauts to print simple everyday tools.

In one example, researchers from Earth were able to send a 3D design of a wrench to astronauts on the ISS. Other areas of ISM are currently exploring the possibilities of printing more durable materials in space. The eventual end goal? Imagine being able to fully print a functional 3D printed part without the hassle of relying on people back on Earth to create the part and send it to you while you wait hundreds of thousands of miles away.

"Ultimately, ISM is critical for future exploration missions, and testing these manufacturing systems on the space station paves the way to allow those missions to be more independent of Earth. With the project's many commercial partners, it also represents an important aspect of NASA's low-Earth orbit commercialization initiatives. Not to mention it frees up all that space previously used to store spare parts," says NASA

Finally, as mentioned in our previous article, researchers are currently looking into ways to three print food in space. Space food is always the most delicious thing to eat. At the current rate of innovation in the 3D printing industry, astronauts may soon be able to print not only a wide variety of foods but dishes that are tailored to an individual's current biological needs.

The people at space agencies around the world are excited about all the potential ways 3D printing technology can be applied to the future of space travel. In the not so far off future, 3D printing could play a vital role in establishing long term colonies on Mars. By combining AI and robotics, additive manufacturing could play a crucial role in the creation of long term civilizations.