These Pac-Man Like Microbots Can Capture and Transport Single Cells

A team of researchers developed a way to pre-program tiny structures to help transport things as small as one blood cell. These microscopic cubes earned the name "microbot origami," and for good reason. The microbots draw on the magnetic energy in their environment to capture each other and get to work.

The researchers from North Carolina State University said there's surprisingly large potential in something so small. The ability for these microbots to move so fluidly opens the doors for them to be used in soft robotics, soft biomimetic devices, and even artificial muscles. 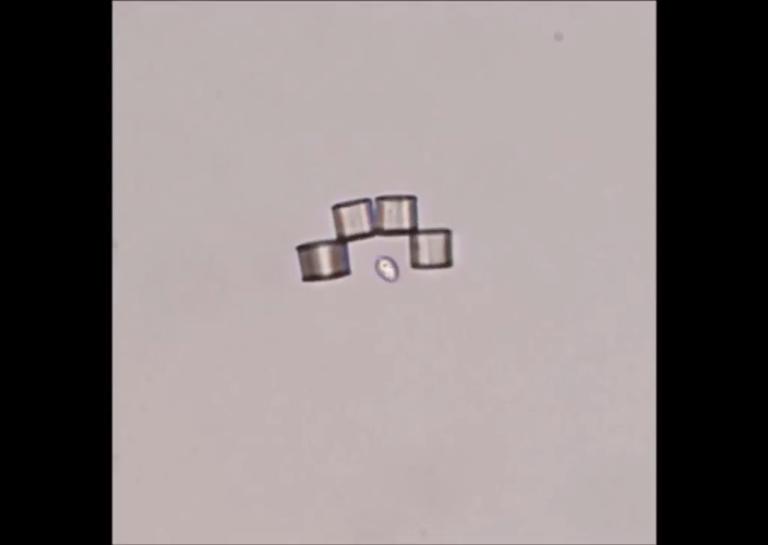 The robots are made from microscopic polymer cubes with metal on one end. This forces the metal to act as a magnet. Oline Velev served as a co-corresponding author for the paper. The professor of chemical and biomolecular engineering at NC State explained more about how the bots interact.

"Since they are magnetized and interacting, the cubes store energy," Velev said. "Tiny particles in the shape of cubes can attach together in sequences where they face in different directions to make, for example, clusters that behave like a tiny Pac-Man: You can open them by applying a magnetic field and then let them close by turning the magnetic field off. They close because they are releasing the stored magnetic energy. Thus, you inject internal energy every time you open the microclusters and release it when they close."

The first major task for these super small Pac-Man machines? Capturing a live cell -- or in the case of the research, yeast. To snag the yeast, the microbots linked together as an open box formation. It then glided to the yeast cell. Once near, researchers shut off the magnetic field and that shut the microbot into a folding position.

Velev noted that a self-folding microbot could be used to isolate specific types of cells, specifically dangerous cells like cancer.

"Previously reported microrobotic structures have been limited to performing simple tasks such as pushing and penetrating objects due to their rigid bodies,” said Koohee Han, Ph.D. candidate at NC State and first author of the paper. “The ability to remotely control the dynamic reconfiguration of our microbot creates a new 'toolbox' for manipulating microscale objects and interacting with its microenvironment."

Another researcher noted that the microbots could allow for types of measurements we currently can't get due to size. Wyatt Shields served as co-author of the paper, and he's a postdoc researcher at Duke University and NC State.

"As the microbot folds, it can compress liquids or solids and you can use it as a tool to measure bulk mechanical properties, like stiffness," he said. "In some ways, it is a new metrological tool for gauging elasticity at the microscopic level."

The research can be found online through Science Advances.