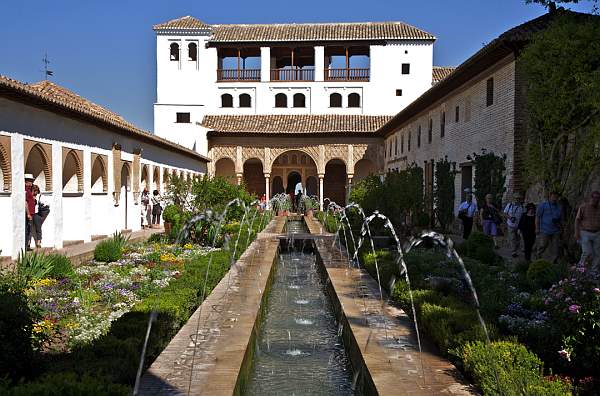 This is one of the most beautiful places built by human hand I’ve ever seen. The palace has been built at the beginning of 14th century, during the reign of emir (king) Muhammad III. The name comes from Muslim Jennat al Arif, "Garden of Arif" or "Garden of the Architect". It was used by the emirs of the Nasrid dynasty, who ruled the Emirate of Granada in Al-Andalus, currently located near the city of  Granada in Andalusia, Spain. A few years after the palace was built, Abu Walid Ismail (or Ismail I) redecorated it by his taste.

Palacio de Generalife is considered for the place that best preserves the style of the medieval Persian gardens, and also one of the oldest gardens of the Moors that survived till present. It consists mainly of two sections: Jardin de la Sultana (Courtyard of the Cypress) and a water pool with lots of fountains, flowerbeds and colonnades along its borders, called Patio de la Acequia (Water-Garden Courtyard). Also, a covered walkway was connecting Palacio de Generalife to the fortress of Calat Alhambra (or “The Red Castle”), but at present a ravine divides them.

Palacio de Generalife was restored at the beginning of the 20th century and completed by Francisco Pietro Moreno.

The Future of Space Might Depend on Self-Destructing Satellites