Paleontologists in Canada announced their discovery of the largest T. rex ever found, making it the largest individual predator known to science.

Paleontologists have discovered the largest Tyrannosaurus Rex skeleton ever found, making it the largest dinosaur fossil ever dug up in Canada.

University of Alberta (UA), Canada paleontologists report that they have uncovered the largest T-Rex the world has ever seen. Nicknamed “Scotty”, the largest dinosaur skeleton ever found in Canada measured a remarkable 13-meters long and is about 66 million years old.

SEE ALSO: COULD YOU BEAT A T. REX IN A RACE?

"This is the rex of rexes," said Scott Persons, a postdoctoral researcher in the Department of Biological Sciences at UA and the lead author of the study. "There is considerable size variability among Tyrannosaurus. Some individuals were lankier than others and some were more robust. Scotty exemplifies the robust. Take careful measurements of its legs, hips, and even shoulder, and Scotty comes out a bit heftier than other T. rex specimens."

Scotty, named after the bottle of whiskey the research team drank to celebrate on the night of his discovery, is the single largest carnivorous dinosaur ever dug up, weighing an estimated 8,800 kg, based on an analysis of the leg bones of the skeleton.

Scotty's Not Just The Biggest T. Rex Ever Found, It's Also The Oldest

It isn’t just Scotty’s size that sets it apart, but also its age.

"Scotty is the oldest T. rex known," said Persons. "By which I mean, it would have had the most candles on its last birthday cake. You can get an idea of how old a dinosaur is by cutting into its bones and studying its growth patterns. Scotty is all old growth."

Given the era, age is certainly relative. T. Rexes grew up very fast and died early, just like all the other rock stars; Scotty was a sagacious, elder T. Rex at the ripe old age 30 to 35 years old. 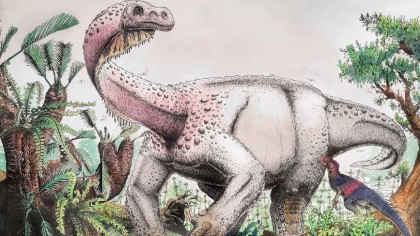 "By Tyrannosaurus standards, it had an unusually long life. And it was a violent one," Persons said. "Riddled across the skeleton are pathologies—spots where scarred bone records large injuries."

Scotty’s assortment of scars show that it had broken ribs, an infection in its jaw, and what the research team suspects may have been a bite on its tail from another T-Rex. To be the oldest known member of a species of dinosaur infamous for its brutal strength, deadly teeth, and primal ferocity tells us a lot about Scotty: a creature doesn't survive that kind of environment without slugging it out with younger, more physically capable members of its species.

It's not hard to imagine all these young adult T. rexes rushing at Scotty's throne thinking that it was an easy kill, but Scotty kept coming out on top for three decades. I'd like to see what happened to that T. Rex that thought it was a good idea to chomp down on ol' Scotty's tail.

"I think there will always be bigger discoveries to be made," Persons said, "but as of right now, this particular Tyrannosaurus is the largest terrestrial predator known to science."

The discovery was published in the journal The Anatomical Record this week.