PancakeBot prints your designs into pancakes

You've probably seen the videos by now of people creating art with pancakes. There's been all sort from a selction of animals to even the characters of the Walking Dead. Well, if you ever sat there wishing you could do this but didn't have faith in your skills then PancakeBot is here to serve up your favourite designs. 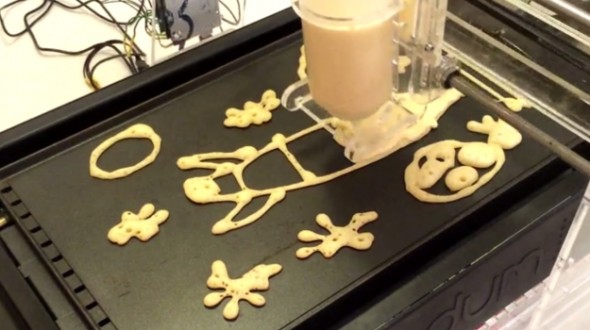 After a successful Kickstarter campaign, PancakeBot is getting ready to roll off the production line. Inventor of PancakeBot, Miguel Valenzuela, originally made the device using Lego blocks. Now, the device has its own custom design and is looking to be a more robut and refined 3D printer.

There's no Lego in sight on the new design and has instead been replaced with acrylic plastic and now looks more like a proper 3D printer or even resembles a router. But don't let that serious look fool you, this thing packs a load of fun. It doesn't print with ink though; it prints with pancake batter. Oh yeah.

Custom designs are printed onto a built-in griddle and you can watch as your pancakes take shape.

You know how printer companies tempt you in with super cheap printers only to have your wallet battered (excuse the pun) by overpriced ink cartridges. Well, you don't need to fear ink costs here as you can just load your own pancake batter, which as you're aware is pretty damn cheap.