After getting frustrated with the wait to exit the plane, a man worried about having an asthma attack ran over to the nearest emergency exit.

Plane delays are the worst. It is one thing to be waiting in the airport for a plane, and it is an entirely different experience to be waiting on the tarmac while scrunched up in your plane seat. You have limited mobility, and depending on the weather, it is either too hot or too cold in the aircraft.

It seems like a 30-minute delay may be too much for some passengers. On New Year's Day, as a Ryanair flight waited to release its passengers, a passenger decided to take matters into his hands and escape the plane.

'I Am Going Via the Wing'

A passenger startled other passengers, pilots, and flight attendants on a Ryanair flight from the United Kingdom to Spain. After getting frustrated with the wait to exit the plane, the 57-year-old Polish man grabbed his carry on luggage and ran over to the nearest exit as the plane sat on the tarmac at Malaga Airport. Though he was able to open the plane's emergency exit, the man ended up temporarily stranded on the plane's wing.

The man's sudden decision to exit the aircraft was triggered by the 1-hour delay before boarding the flight as well as the 30 minutes wait to disembark. The passenger who sat next to the man told MailOnline, "It seems nobody noticed that the man who decided to exit the plan was suffering from asthma."

Maybe you have been in a situation like this. You are tired after a long flight, and you are eager to have your feet back on solid ground. Yet, forcing your exit out of a plane may not be the best answer.

Another passenger on the plane gave a full account of what happened to authorities stating, “This man decided he wasn’t going to wait any longer. He activated the emergency door and left, saying: ‘I’m going via the wing’. It was surreal.” He added: "He was sat on the wing for quite a while until the crew managed to get him back inside.”

After the incident made its rounds on the internet, Ryanair released a statement of how the incident is dealt with. 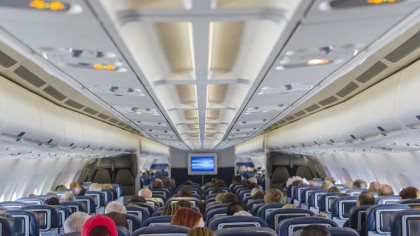 “Malaga airport police immediately arrested the passenger in question and since this was a breach of Spanish safety and security regulations, it is being dealt with by the Spanish authorities.”

Though the man is sure to have been frustrated, it is not safe or wise to mess with the potential security of a flight, no matter how badly you need to get somewhere, especially on New Year's Day. This is a lesson that is sure to stick with him for the remainder of 2018.