Pathway to The Rejection-Free Organs: An Artificial Oesophagus Implanted in Lab Rats

The research opens the possibility of rejection-free organs and tissue for transplant.

The oesophagus is a complex organ which is used for delivery of food and liquids to the stomach from the mouth. The artificially grown oesophagus may help to overcome some major drawbacks of oesophageal substitution.

1 in 3000 babies is born with abnormalities of the oesophagus, commonly a gap between the lower and upper section in the connection with the stomach.

Dr. Paolo Macchinarini, one of the most famous surgeons in the world started one of the most revolutionary treatments in which the patients would receive a synthetic organ transplant, replacing trachea, or windpipe, with a plastic tube. But after initial success, the operation started to fail.

The sheer amount of failure ignited the research for the artificially grown oesophagus.

How did they pull it off?

The researchers harvested rat oesophagi and decellularized it to produce an oesophageal scaffold. This scaffold was then seeded with human and mouse stem cells.

Cells from different species were chosen to help scientists differentiate cell growth. It also helped in the migration of the cells from the center of the injection point.

The monolayer culture proliferated and gave rise to a multi-layered epithelium within 2 weeks.

The oesophagus comprises mainly of smooth muscles. So, it was a moment of great pleasure when scientists found optimal growth in epithelial as well as muscular compartments.

The bio-artificial oesophagi were attached to the omentum in a lab rat (The omentum is a membrane of a squamous cell and connective tissue which surrounds the inner abdomen). This approach proved to be better and less risky than the similar operation in thoracic or chest area.

Moreover, the scientists successfully preserved the bioengineered organ under very low temperatures and transplanted them in lab rats.

The challenges and the value of victory

To read a report on scientific successes is quite exciting but effortless. However, such success comes out of painstaking endeavors against nature.

The research team led by Luca Urbani and Carlotta Camilli tackled many challenges in the field of tissue engineering and molecular biology.

This is the first time a multi-layered tubular tissue is developed in a lab. This study also showcases the effectiveness of intrinsic vascularization, i.e. attachment to blood vessels. 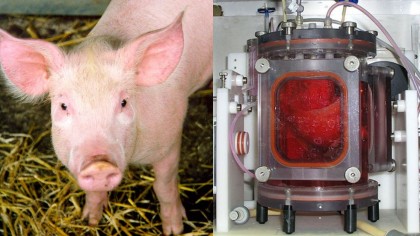 This is a major step forward for regenerative medicine, bringing us ever closer to treatment that goes beyond repairing damaged tissue and offers the possibility of rejection-free organs and tissues for transplant," said Paolo De Coppi from the University College London (UCL) in the UK.

The discovery can become mainstream in a few years following more animal trials. It will pave a path for research in bioengineering of other essential tissues and organs.

The researchers give hope for large arrays of cryo-preserved organs ready for transplant in all sorts of oesophagal dysfunction without worry of rejection by the patient’s body.

The findings of this research are published in Nature Communications.