Patient Coughs A Blood Clot Looking Like A Lung Passage

In an epic coughing fit, a heart failure patient expels a blood clot which resembles parts of a lung.

Despite rapid advancements, particularly in nanotechnology, which enable the faster and more efficient delivery of medicine internally, medical mysteries continue to remain, proving that the human body is still highly unpredictable.

One such example is the recent news of a familiar, yet sizeable, object which was coughed up by a patient last week.

A heart failure patient produced a near-perfect cast of a right bronchial tree, a crimson specimen that shocked all the physicians on site who witnessed the event.

The New England Journal of Medicine included the image as part of its photo series on medical abnormalities. The comprehensive list, which covers everything from psoriasis to rare cases of lead intoxication, includes over 2,800 high-resolution images.

As one would expect, this occurrence took place following what doctors described as a rather severe episode of coughing up blood, or hemoptysis.

The history-making patient was a 36-year-old man, who was attended by two doctors: Georg M. Wieselthaler and Gavitt A. Woodard.

They described the events leading up to the dramatic moment: "An Impella ventricular assist device was placed for management of acute heart failure, and a continuous heparin infusion was initiated for systemic anticoagulation.

During the next week, the patient had episodes of small-volume hemoptysis, increasing respiratory distress, and increasing use of supplemental oxygen (up to 20 liters delivered through a high-flow nasal cannula).

During an extreme bout of coughing, the patient spontaneously expectorated an intact cast of the right bronchial tree."

A pump had been given to the patient to alleviate the symptoms, but there were still complications: “You have high turbulence inside the pumps, and that can cause clots to form inside,” Wieselthalers explained to The Atlantic in an interview.

So with all these patients, you have to give them anticoagulants to make the blood thinner and prevent clots from forming.” The patient died within a week of this incident, his death no doubt aggravated by this trauma, although the physicians had managed to stop the internal bleeding within two days.

Wieselthaler believes that one possible answer for why the medical mystery happened is due to fibrinogen, which is a blood plasma protein component that is part of the coagulation process.

With this extra buildup of the platelet-trapping substance in the body--which was assisted by the rubbery airways the pair later detected--the mass could form and be expelled without much incident.

“The blood clot itself was quite soft and delicate,” Woodard explained to Gizmodo. 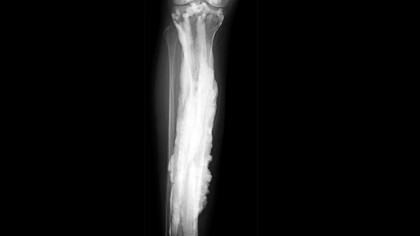 It did not damage the airway. It was so fragile I had to be careful when positing it for the photo not to have a piece of it break off.”

Despite all that the pair have seen over the years, they reported with excitement that the patient's specimen is evidence that in the medical profession there are, and will always be, surprises that add an element of excitement and freshness to their work:

“We were astonished,” Wieselthaler simply says. “It’s a curiosity you can’t imagine—I mean, this is very, very, very rare.”