Being only five millimeters in size, these spiders produce intricate body colorations, patterns, and movements. Scientists have discovered the rainbow iridescence of the spider comes from the scales on the spider.

Finding your love partner or soulmate may be hard, but the peacock spider has it a little harder. Peacock spiders, or Maratus spp., have some of the most extraordinary courtship rituals in the animal kingdom. Jumping around with a stunning brightly colored torso, the male uses these colors to attract females. In an impressive display of dance moves that would make the rhythmically inclined jealous, these cute little spiders flash these colors as part of their mating rituals.

However, the vibrant colors on the spider are attracting more than just other female spiders. For a while, scientists have been captivated by the little spider. More recently, a species of peacock spiders, native to Australia, have been inspiring new ways to produce color in technology.

Being only five millimeters in size, these spiders produce intricate body colorations, patterns, and movements. The Peacock Spider that has won the hearts of scientist is Maratus robinsoni. 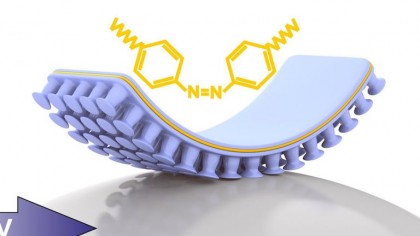 These Light-Actuated Grippers are Inspired by Geckos

What makes this species of spider so impressive is the spider's captivating use of an entire rainbow of colors in its attempts to attract a mate, making it the most colorful of the species. These little walking rainbows have researchers curious and in this curiosity, they have decided to find out how the spider can produce such colors.

To complete this monumental task for such a small little creature, a team from multiple different fields were called in to tackle the task. The team included scholars and researchers from the California Institute of Technology, the University of Nebraska-Lincoln, the University of Groningen in the Netherlands, and the University of Ghent in Belgium to name a few.

Do Your Dance Little Spider

To tackle their task the super team of researchers examined the spiders using electron microscopy, hyperspectral imaging, imaging scatterometry and optical modeling. Using these techniques researchers were able to test hypotheses about the spider. Through their intense testing, they were able to discover that the rainbow iridescence created by the spiders originated from specialized abdominal scales on the spiders. According to the study "These scales combine an airfoil-like microscopic 3D contour with nanoscale diffraction grating structures on the surface. "

The interaction of the nano-diffraction grating allows the separation as well as the isolation of light into its component wavelengths at better distances and angles than that is possible with modern technology.

What does this mean? The colorful scales from these spiders could help scientists overcome some limitations in spectral manipulation, reducing the size of spectrometers, as well as other biotechnologies and engineering.