We recently reported on the multi-directional lift that is going to reduce energy costs of buildings. But how about one that only requires your own muscle power? The Vycle is just that, a pedal-powered vertical lift. Invented by Elena Larriba and Jon Garcia, the Vycle is an eco-friendly alternative to lifts that keeps you fit at the same time.

Based on a bike design, the Vycle doesn’t require really strenuous work between floors as it uses a bike gearing system to allow you to carry your own weight to the next floor by pedaling. 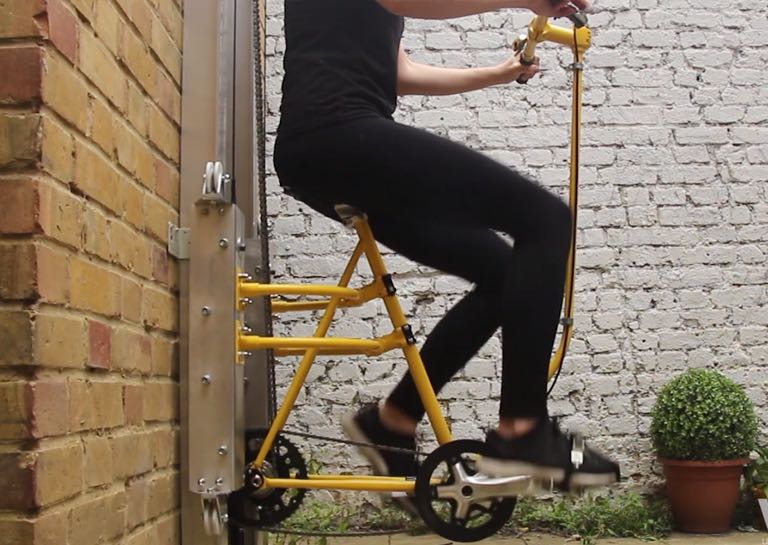 It definitely seems a lot more fun than taking the stairs. Not to mention easier! The project is described by the inventors as a “human powered vertical transport system for our increasingly growing cities”. While we can’t imagine that it is going to be installed in huge skyscrapers anytime soon, it seems like a really smart idea for lower level dwellings. Or as a retrofit to old buildings without lifts. Imagine being able to pedal your grocery bags to the third floor rather than dragging them up the stairs!

The company's website pitches the idea in a few different ways. First, when installed in office buildings, the Vycle acts, not only as a transport method but as a way to reinforce environmentally friendly values. It also improves the wellbeing and fitness of employees. 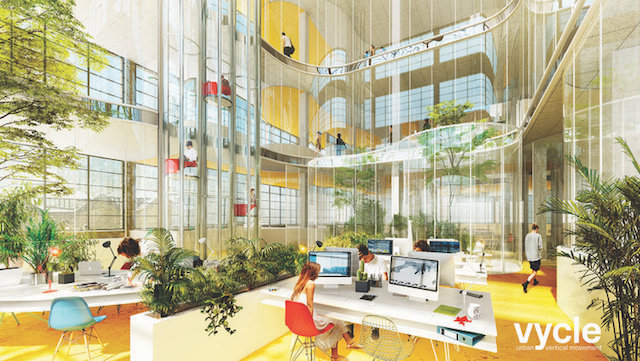 The company claims that Vycle “reintroduces the sense of flow and community that currently is exclusive on the urban ground plane.” Which seems a little vague, but there is no doubt, an office with a Vycle would be a lot of fun.

Vycle could also prove to be useful as a temporary measure for buildings, moving up and down inside building structures. The website notes that “in the construction sector, around a quarter of the workforce is aged over 50. Vycle is an alternative to long ladders often used in these temporary works that can offer the user a more sustainable and safer way to navigate through scaffoldings, cranes or transmission towers.” This makes a lot of sense and would significantly reduce the likelihood of accidents related to scaffolding and ladder use on site.

The great invention was developed as part of Elena's studies at the Imperial College and the Royal College of Art, in collaboration with engineer Jon Garcia. They are currently looking for investors and backers to continue the project.