The US Department of Defense is reviewing Elon Musk's Security Clearance after the SpaceX founder and CEO smoked pot on a podcast last year.

Elon Musk’s secret security clearance is currently being reviewed by the US Department of Defense, following the SpaceX CEO’s public use of marijuana on a podcast last year.

The review is part of a process following Musk’s reapplication for a secret-level security clearance from the US government in conjunction with his role as the CEO and founder of SpaceX, according to a report in Bloomberg.

The filing, an SF-86 security form, requires employees or contractors with the federal government to disclose any illegal drug use in the preceding seven years prior to the filing. Due to SpaceX’s certification to launch military spy satellites, Musk already had a secret-level security clearance when he went on comedian Joe Rogan’s The Joe Rogan Experience podcast in September of last year.

Smoking what he described as a blunt—the commonly used name for a mix of tobacco and marijuana or just marijuana wrapped in a cigar leaf wrapper—Rogan asked Musk, “you want some of it? You probably can’t because of stockholders, right?”

“I mean it’s legal, right?” Musk replied before taking a drag of the blunt himself.

Several US states have passes laws and referendums legalizing marijuana for recreational use, including California, where the podcast was recorded. The substance is still classified as an illegal drug by the federal government, however, and its use is grounds for the revocation of secret-level security clearances.

The review has not impacted SpaceX’s operations or its contracts with the federal government, however.

Day to day operations for the company are handled by the company’s President and Chief Operating Officer, Gwynne Shotwell and the company has won several national security related contracts since the September 2018 podcast. This includes a contract awarded on Febuary 19th for three launches, valued at $297 million.

The security clearance refiling comes at a particularly active time for Musk, both good and bad. 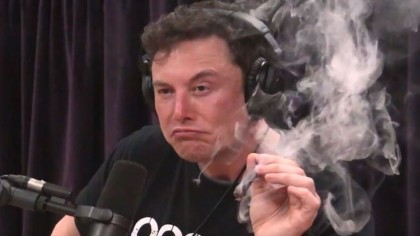 Last week saw the SEC file a complaint against Musk with a US district court judge for what they claim was a violation of Musk’s settlement with the securities agency over inaccurate tweets that could affect the share prices of Tesla stock. Tesla also moved to close down Tesla auto showrooms and move all sales online in an effort to cut costs.

Meanwhile, those efforts allowed Tesla to afford to introduce its long-awaited $35,000 Standard Range Model 3 sedan, considered by many to be a major long term goal for the company and the electric vehicle industry as a whole.

SpaceX is also in the middle of its Demo-1 test flight, which saw SpaceX’s Dragon Crew capsule successfully dock with the International Space Station in anticipation of a manned flight during the Demo-2 test flight, which should take place sometime later this year.