Peugeot Hybrid Air : A car that runs on air

Firstly, let's get one thing straight: There's no such thing as a truly air powered car. Air requires energy to store energy as it needs to be compressed. However, Peugeot have brought a new hybrid combination to the automotive table by teaming hydraulics with a conventional gasoline engine. During low speed driving under 43mph, in a city for example, the car will solely be powered by air 80% of the time and the gasoline engine provides a boost for uphill driving or fast speeds such as motorways.

Peugeot are planning to introduce the hybrid transmission to the Peugot 208 hatchback and have them rolling off the line by 2016. The idea is the brainchild of Karim Mokaddem and Andrés Yarce. They have claimed it extends urban-driving range by 90% against to non-hybrid transmissions and will only produce 69g CO2/km; compare that to the Toyota Prius's 89g CO2/km. With an estimated starting price of around $26,000, it's also $7700 cheaper. 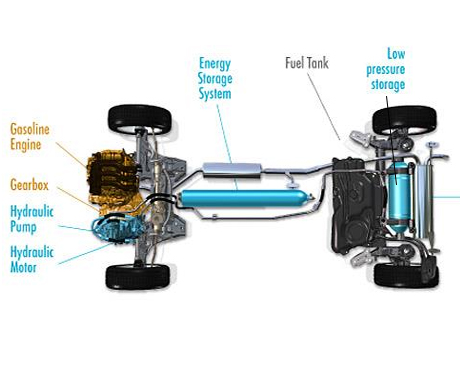 So how does it work? During acceleration, high pressurized nitrogen gas is discharged from the energy storage system which pushes hydraulic fluid, driving a hydraulic motor connected to the transmission. The depressurized nitrogen gas then collects in the low pressure storage system. As the car decelerates the process is reversed; energy from regenerative breaking (or the gasoline engine) powers a hydraulic pump that pushes the hydraulic fluid into an accumulator and also re-pressurizes the nitrogen as it returns to the high pressure storage system. The remainder of the power will be provided by a 82-hp 1.2-liter gasoline engine.

It's interesting to see how this system will face up against the increasing popularity of electric hybrid systems. Electric hybrid vehicles have well established themselves in the automotive world in recent years and Peugeot's proposed gas hybrid system has no proven reliability meaning it could be difficult to gain consumer acceptance. They claim the Air Hybrid 208 coming in 2016 can produce 97.3 mpg, with an aim of 117 mpg by 2020.

"It's true that today the market is dominated – on the hybrid side, for sure – by Asian technology, that's reality," accepts Mokaddem. "So it was a little bit unexpected for a European car maker to develop such a new approach. Why? I don't know."

We will have to wait and see if Peugeot can live up to its promise.