NASA astronaut Ricky Arnold captured a stunning photo of the Kilauea Volcano from the ISS.

Hawaii's Kilauea Volcano has been erupting continuously since May 3. The fiery mountain spewed so much lava out of its molten core that is swallowed huge tracts of land and even filled a lake.

While it might not be making headlines anymore the flowing lava emitting from Fissure 8 has caught the attention of NASA astronaut Ricky Arnold who is currently aboard the International Space Station (ISS).

Arnold managed to capture some incredible images of the volcano on June 20, describing the color of the emitting molten mass as “pumpkin orange.” The photo shows just how beautiful and simultaneously destructive our planet can be.

The pumpkin orange lava flows of #Kilauea aglow during the predawn hours over the Pacific Ocean. #Hawaii pic.twitter.com/N9k8uVfn6n

Other footage of the volcanic eruption has been captured by the United States Geological Survey (USGS). The incredible photos and videos have detailed the way the mass of lava has colonized the area around the volcano.

Houses were eaten up by the eruption as well as new land formed from as the hot lava hit the cool pacific ocean. The volcano’s lava has also evaporated an entire lake. It took only two hours to transform Green Lake, the islands largest freshwater lake.

A local advisory reported the event that occurred on June 3: “By 1:30 pm the steam plume had ceased and by 3 pm, a Hawaii County Fire Department overflight reported that lava had filled the lake and apparently evaporated all the water.” 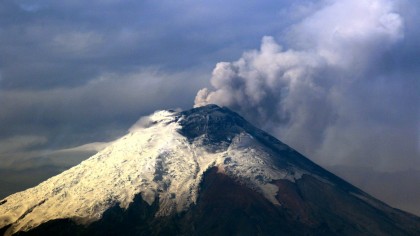 The eruption of the volcano is dramatic and potentially deadly, but statistics released by the USGS puts the image and video into perspective by clarifying the volcano lava has only covered 0.2 percent of the entirety of Hawaii’s Big Island.

The images from space go even further to demonstrate this number by showing the volcano’s fury in contrast to the backdrop of the Pacific Ocean during the twilight before the dawn. The presence of the sun just out of shot makes the destructive volcano seem even smaller.

It could be compared to the lighting of a match inside a stadium. Arnold has a few pictures of Kilauea on his Twitter account including this image captured soon after the eruption started with smoke plumes clearly visible.

We launched to @Space_Station on a spacecraft called “Hawai’i”. We flew over our namesake today and are sending much aloha to everyone there. The plume from #Kilauea is visible from space. pic.twitter.com/r76F9HO0Jg

SpaceX Joins Locals to Save Nearly 4,500 Sea Turtles From Cold in Texas