Physicists Appear to "Reverse Time" in a Quantum Computer

Using a quantum computer, scientists appear to have reversed the entropy of a two-qubit and a three-qubit system, opening new avenues of error correction in quantum computers.

Scientists appear to have “reversed time” in a two-bit and a three-bit quantum computer after calculating the probability of the phenomenon occurring naturally in a localized electron.

Reversing The Entropy of a Two-Qubit System

Scientists in Russia, Switzerland, and the US have come together to apparently reverse the entropy of a two-qubit quantum computer with 85% accuracy and about 50% accuracy in a three-qubit system, though they note that the remaining inaccuracy is due to the imperfections in the quantum computer itself, not their algorithm.

Entropy, defined as the measure of disorder in a system, naturally increases over time, as nature moves from order to disorder. In the case of the quantum computer the researchers built, the system that begins in a state where the qubits are initially 0s, but over time degrade into a randomness of 1s and 0s.

This is in keeping with the Second Law of Thermodynamics (SLT), which states that in an isolated system, entropy never decreases. What the researchers have done is apparently rewind this entropy to return to the quantum computers original state on demand, offering new possibilities for error correction in quantum computers, which could greatly advance their deployment.

The researchers from the Moscow Institute of Physics and Technology (MIPT), Eidgenössische Technische Hochschule Zürich (ETH Zürich), and Argonne National Laboratory, US (ANL)—who published their findings today in the journal Scientific Reports—, began by calculating the probability of a localized electron would revert to its earlier state from one moment to the next.

The evolution of the state of the electron from one moment to the next is determined by Schrödinger's equation. This equation makes no distinction between the points in time, but in accordance with the SLT, the area which the electron can appear grows quickly.

"However, Schrödinger's equation is reversible," adds Valerii Vinokur, of ANL and a co-author of the paper. "Mathematically, it means that under a certain transformation, called complex conjugation, the equation will describe a 'smeared' electron localizing back into a small region of space over the same time period."

Though such a reversal hasn’t been observed naturally, the scientists believed that it was theoretically possible.

The researchers compare this to a billiard ball hitting another. If you recorded the event normally, an equation would govern the behavior of the different positions and velocities of the billiard balls—in other words, their states at any given moment.

However, if you reverse the recording, the very same equation would govern that state transition as well. Essentially, 2X equals Y, but Y also equals 2X, depending on which way you want to read the equation. Both are valid and there is no way to tell which form was the “original” equation. 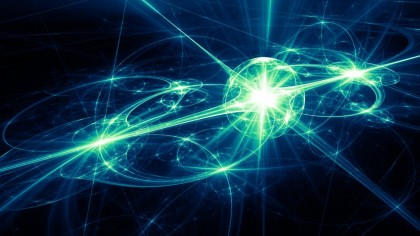 In the case of an electron, it was theoretically possible to run Schrödinger's equation backwards, so that if the equation governing the electron’s state transition was Y = 2X, you can get to Y starting from 2X using the very same equation, 2X = Y.

In order to determine how often this phenomenon occurs naturally, the team calculated the probability of an electron “smearing out” over a fraction of a second and spontaneously localizing into a previous state, a more precise way of saying going backward in time.

They calculated that if you looked at 10 billion newly localized electrons over the entire life of the universe—13.7 billion years—every second, you would observe this phenomenon only once, and even then, it would be a single electron moving one ten-billionth of a second back in time.

If the probability of a single electron evolving into a past state is all but impossible, how then have these scientists recreated the effect in the quantum states of qubits with a success rate of 85% in a two-qubit system and just under 50% for a three-qubit system?

Essentially, the researchers designed an algorithm that they describe as giving the billiard table a “kick” which reverses the state changes in the qubits, reverting them backwards to their previous states. This would be like striking the billiard table in just the precise place with just the precise force to send all of the balls directly into reverse, eventually reforming into a pyramid.

"Our algorithm could be updated and used to test programs written for quantum computers and eliminate noise and errors," Lebedev explained.