Physicists Crack the Secret to Zero Drag in Water

An international team of researchers proved a long-standing, strictly theoretical physics principle that said drag could be completely minimized given the right conditions.

It's the physics concept that slows swimmers down, forced fish to evolve to fight it, and lengthens the travel time for many ships. Competitive swimmers will rid themselves of exposed body hair just to reduce on it -- Drag. Drag slows everything down in water, and reducing drag on an object by just 3 to 5 percent can greatly affect an object's efficiency.

However, one research team developed a way to reduce drag by 1000 percent. The group consisted of researchers from across the globe including the University of Melbourn, King Abdulla University of Science and Technology Saudi Arabia, and the Institute of High-Performance Computing in Singapore.

For such a breakthrough, the team's setup remained deceptively simple. They dropped a metal ball only 2 cm wide into a pool. The ball formed a gas bubble around itself, and then the ball/bubble combination sink together. According to the research, the ball experiences 10 times less drag than a solid object with the exact same shape.

The researchers took years in order to understand the physics and specifications behind the theory. Derek Chan serves as a mathematician at the University of Melbourne. He was also a leader for the study.

"There are two ways we can create these gas layers," he said. "The first is to heat a metal sphere to a very high temperature, and the second is to use a superhydrophobic [incredibly averse to water] surface."

They first used the superheating theory:

"For the first, we heat the ball to 400 degrees Celsius, and we heat the water to 95 degrees Celsius – just below its boiling point," Chan said. "When the ball hits the water it boils a small amount of water immediately around it, creating a layer of water vapor. At the right combination of ball and water temperatures this layer becomes stable, so the ball is completely encased in the gas. We call this a Leidenfrost state."

For a better visual about the Leidenfrost state, check out this video from YouTuber Misk8k below:

The team then tested out the second theory of hydrophilic surfaces. For those needing a visual representation of surfaces hating water, think of how water droplets bead up and run off a Goretex jack or a high-quality non-stick cooking pan. Chan noted that the benefit of using hydrophilic surfaces is that it saves energy by not having to heat the water; it works at room temperature.

Professor Sigdur Thoroddsen helped lead the King Abdullah University part of the team along with professor Ian Vakarelski. Thoroddsen said the entire project hinged on the flow of water or air at the boundary layer.

"In our previous experiments, we got stable gas layers around these balls, but they were less than 1 millimeter thick," he said. "This helped to reduce the drag by 10 or 20 percent, but this wasn't enough, so we started to think of ways to create a bigger bubble around these balls."

So the team started dropping the metal spheres from various heights to find the 'sweet spot.' They discovered that at just the right height range, a large gas bubble formed around the ball and that bubble maintained while it sank.

Evert Klaseboar works in the Institute of High Performance Computing and noted that the whole project makes a long-standing theoretical concept and makes it real.

"There's a well-known theory in this field, that the drag force on an ideal object, with a free-slip surface, will fall to zero," said Klaseboer. Klaseboer compared the purpose of dimples on a golf ball to trying to achieve this zero-drag state. "This is the well-known d'Alembert's Paradox and our result is a 21st-century realization of a 18th-century theoretical result. In the study of fluid dynamics, we've always used a hypothetical sphere because we haven't been able to create an object with a free-slip surface – until now." 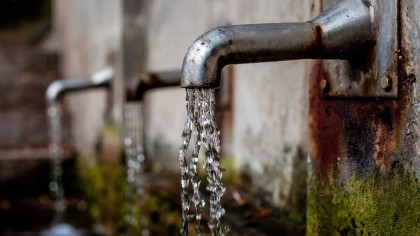 This 'Wonder Material' Could Help Solve a Global Water Crisis

"The motion of balls, like the aforementioned golf ball, is impossible to predict with a mathematical formula because of the chaotic action of turbulence, but the sphere-in-cavity has no turbulence and can be described by very simple equations. It could become a textbook example of some fundamental hydrodynamic theories."

Chang said he hopes that while technology can maintain 10 to 20 percent drag reduction, the team wants to probe deeper.

"...our experiment demonstrates that for the best case scenario, an order of magnitude reduction is possible," he said. "This now sets the target for future research in this area."

You can find the entire study in the journal Science Advances.