Inspired by an old movie, one physicist developed a new type of "eel" that could travel through human body and deliver drugs.

This unique development could be a case of technology imitating art rather than the other way around. When physicist Seth Fraden was young, he became entranced with the movie Fantastic Voyage. In the film, travelers on a microscopic submarine move through the human bloodstream on an adventure.

Fraden decided to make a microscopic explorer of his own, but it's not quite the submarine depicted in the movie. He opted for something with a bit more natural movement, one that could easily and deftly navigate in fluids. Fraden decided he would create an eel.

This eel would deliver drugs to specific cells or genes. While it wouldn't have the powerful jaws of a moray eel or signature snap of other eels, Fraden's creation would replicate the flexibility of the sea creature by being made of a gel that could easily glide through water.

But why an eel? Because of its build and knack for swimming effortlessly, Fraden explained.

"Compared with most sea creatures, the eel has a relatively simple system for swimming," a statement about the project said. "Its spine runs the length of its body and is surrounded on either side by a column of neurons. When neurons fire sequentially down one of the columns, they cause a wave of muscular contraction, making the spine curve. When the neurons in the other column fire, the spine curves in the opposite direction. The result is a smooth back-and-forth motion of the spine as the eel swims." 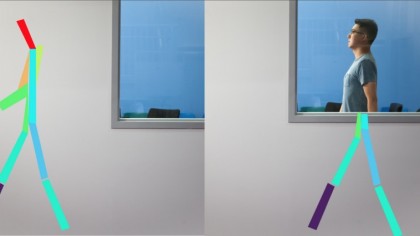 In order to replicate that muscular contraction and fluid motion, Fraden used a three-step process. First, Fraden needed a neuron that oscilated between two states. He used BZ reaction neurons which switch back and forth between being active and inactive. Fraden also counseled with Irv Epstein, another professor from Brandeis who is a global expert in BZ reactions. Fraden build a container similar to an ice cube tray to contain these reactions.

After Fraden found his neurons, he set out to build a neural network within the ice cube compartments. Each compartment was an individual neuron, Fraden said. This allowed the columns to be seen as lines of neurons on either side of an eel's backbone. He set off the BZ reactions at the top of one column, causing a molecule to be released into the ice cube container below it, activating the next reaction.

After perfecting these reactions and studying their interconnectivity, the last step Fraden needed to do was to put the neural networks into a gel.

"We hope the material will behave in the same way an eel's body does in response to the firings of its neurons," Fraden said. "It will slither away."

"'Animating inanimate matter'" is how he describes it. He's not bringing inorganic matter to life," a statement about Fraden's project explained.

Fraden could use the process to build a variety of helpful creatures, including a type of eel-suture that could close a wound up on its own or an eel to deliver nanobots that repair pipe damage.

Roboticists Create Third Arm Gentle Enough to Pick up Fruit, Yet Capable of Punching Through a Wall