For ten years, since their discovery, fast radio bursts have been confusing astronomers. These pulses of intergalactic radio energy have, as yet, defied explanation. A new theory may help explain them and point to a possible technological origin. It could even hint at alien spacecraft propulsion. Of course, extraordinary claims require extraordinary evidence but we should be willing to at least humor seemingly incredible ideas.

Let's take a look at this speculative claim given the strange nature of the radio bursts. 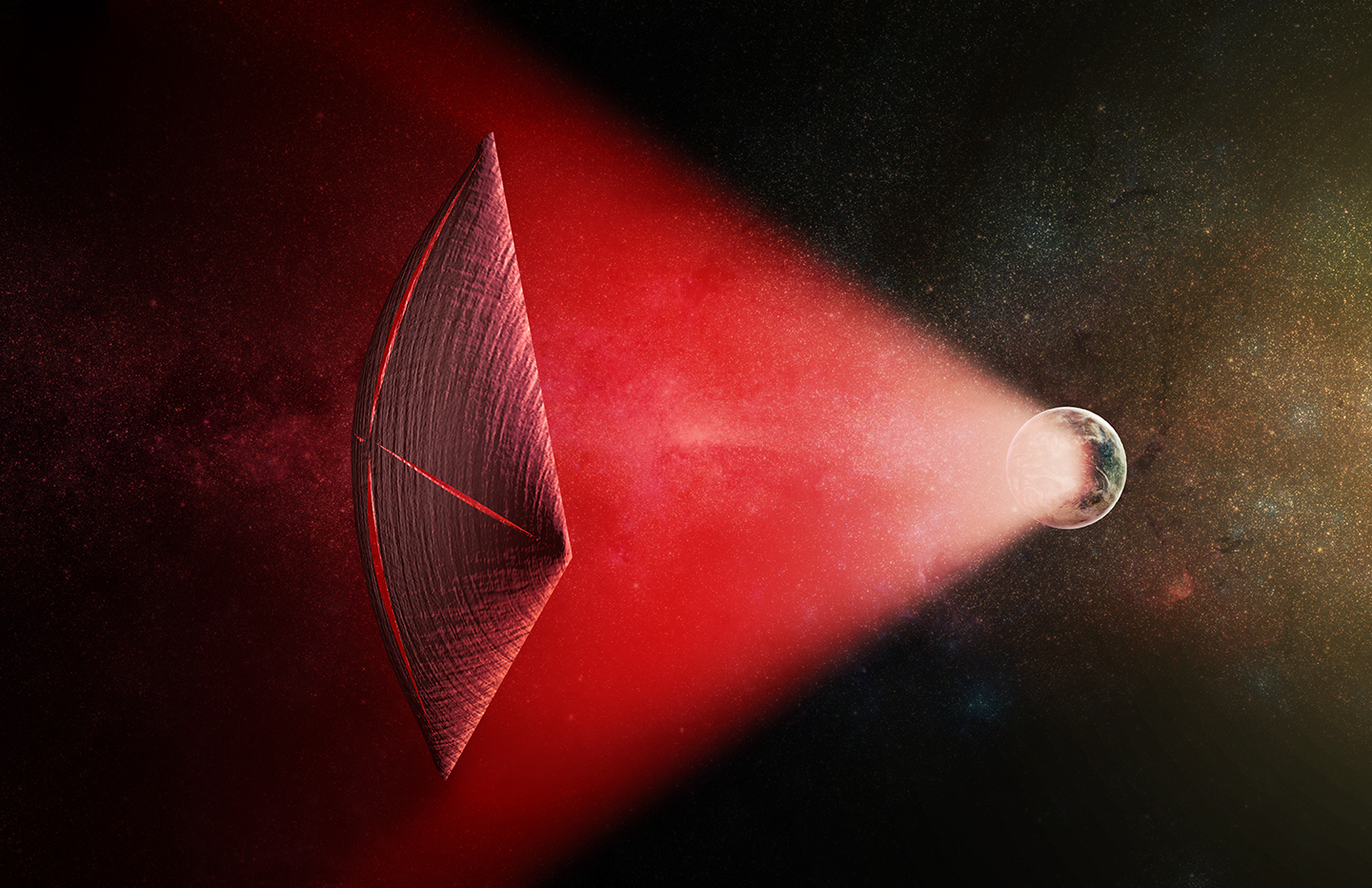 An artist's illustration of a light-sail powered by a radio beam (red) generated on the surface of a planet. The leakage from such beams as they sweep across the sky would appear as Fast Radio Bursts (FRBs), similar to the new population of sources that was discovered recently at cosmological distances.[/caption]

A new paper published by Abraham Leob and Manasvi Lingam from the Harvard-Smithsonian Center for Astrophysics seems like something out of science fiction. It proposes that fast radio bursts are created by advanced alien civilizations to drive spacecraft through interstellar space. Initially, sounding more like a UFO conspiracy than a scientific study, we may reject the idea out of hand, but let's give it a chance. No one, let alone the authors, would deny that much more evidence is required to make sure it's not an entirely natural astrophysical process.

Of course, this wouldn't be the first time astronomers mistook natural processes for aliens.

Fast Radio Bursts (FRBs) were identified in 2007 for the first time at the Parkes radio dish in Australia from stored data actually recorded in 2001. At present, only 17 episodes of these millisecond-long flashes of radio energy have been recorded. Astronomers are at a loss to explain this phenomenon. Possible explanations range from supermassive neutron stars, gamma-ray bursts and stellar flares. Whatever the origin, most agree that Fast Radio Bursts originate outside of our galaxy and have traveled billions of light years before detection.

Fast Radio Bursts are very strange indeed and with no solid explanation so far Leob and Lingam decided to muse over a possible extraterrestrial technological origin.

Why are Fast Radio Bursts so strange

Loeb explains that - “This means that a hot surface would need to have that temperature in order to radiate at the observed level,”. He continues , “There is no known astronomical object that generates radio bursts at such a high brightness, which is tens of billions of times brighter than the known population of pulsars, for example.”

Fast Radio Bursts also repeat but not in a predictable manner. According to the researchers, this is contrary to what we might otherwise expect from say the collapse of a star. This kind of event would energize an explosion with high brightness temperatures. Fast Radio Bursts' spectra also appear to be focussed around a particular frequency. You also wouldn't expect this from a pulsar.

“These clues are consistent with an artificial origin,” believes Loeb.

Loeb and Lingam considered the possibility that Fast Radio Bursts could be coming from powerful alien transmitters. Using this hypothesis, the researchers considered the technological feasibility of such a device. Not to mention its possible application. From their work, they postulated that if the device was solar powered, sunlight falling on an area around twice the size of Earth would suffice to provide the observed energy. Surface area for such a device could come from a large terrestrial plant. It could also be a massive space-based solar collector, perhaps similar to a Dyson sphere. 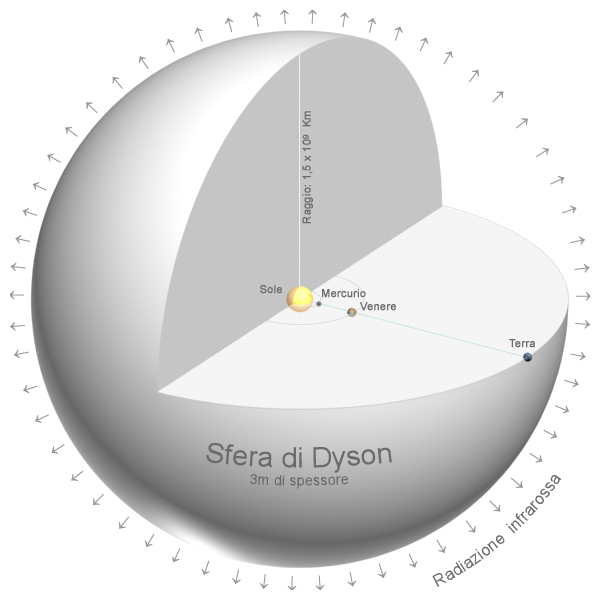 Such a device would need some form of cooling system to prevent the entire structure melting. They proposed, perhaps, a water-based cooling system. Clearly, such a device is well beyond our current technological capabilities but it should be plausible, and it won't defy current known laws of physics. Then again we are talking about potentially highly advanced aliens, not humans.

With a sketched out proposed device, the next obvious question would be why build it? What does it do? The researchers believe they have a potential answer. Perhaps it is used as an interstellar, who knows, maybe an intergalactic signaling system. It could be an advertisement method to let other intelligent lifeforms know they exist, or once existed. Another possibility is that it is used to drive probes or even ships on long journeys through the void.

“We envision a beamer that emits the radio waves as a method of launching a light sail,” Loeb says. “In the same way that a sailboat is pushed by wind, a light sail is pushed by light and can reach up to the speed of light.”

The power of light

Light sails, or solar sails, are not a new proposal, mankind has proposed their potential use for space travel in the past. Generally speaking, to power a light sail in this case, the transmitter would focus its beam onto the sail long enough to "push" it forward. The amount of power created should be enough to drive a payload of a million tons. If you measure things in large cruise ships, that would be about 20 large cruise ships. C0-author Mansavi Lingam points out that “That’s big enough to carry living passengers across interstellar or even intergalactic distances.”

All well and good, but why can we detect them? That could be explained as leakage from the propulsion system.

Loeb explains -“The radio beam sweeps across the sky like a radar, because the source is changing its orientation relative to us,”. “This could be due to the spin of the host planet or the motion of the host star or galaxy.” So it's an "accidental" exposure from the beam pointing at Earth. The new study has been accepted by the Astrophysical Journal Letters for publication.

SETI Research Director Andrew Siemion explains that much more work will need to be done, as well as more evidence needed. He explains that Fast Radio Burts are unlike anything we've ever seen before. This is great but also forces scientists to consider many different options. Although Siemion may as yet be unconvinced, he does congratulate the team on their work, if a bit unconventional.

“We cannot...exclude the possibility that anomalous signals like fast radio bursts are produced by an advanced extraterrestrial technology, and even though it is undoubtedly an unlikely possibility, it must remain a possibility until we can rule it out,” explains Siemion.

The Lingam and Loeb paper presents an intriguing idea for a specific technology beyond traditional communication or radar systems that might produce intermittent radio bursts: directed energy propulsion systems. Although admittedly speculative, this is a wonderful example of the thoughtful and open-minded approach we must bring to all aspects of astronomy when searching for potential signals from extraterrestrial intelligence.

Siemion's comments and common sense does suggest we need to be careful not to jump to extreme conclusions. This proposal will remain one possibility among many until further data is collected. Science and the public's imagination can carry us away. This was particularly well demonstrated with the recent KIC 8462852 megastructure theories. Even the researchers admit their theory is somewhat "out there". But we can't simply dismiss a theory just because it sounds weird.

“The exciting aspect of doing science is that one rules out possibilities with better data,” Loeb says.

The history of science shows that it would be unwise to rule out possibilities just based on prejudice. This often leads to stagnation rather than progress. Having worked out a set of parameters for the artificial origin of fast radio burst, I would have no problem accepting a different explanation, as soon as it is validated by future data. Science is a learning experience; we figure out the way nature by culling down possible explanations through observations and not prejudice.