The Physics Behind the Analysis of Blood Splatter in Crime Scenes

In terms of forensic investigation, the science behind determining how an attack took place is actually rather complex. When analyzing blood splatter on a wall or material, the forensic analysts have to use a fair amount of physics and calculations to determine the source of a droplet. The end result has to be an accurate enough play by play of the crime to hold up in court. For a long time, forensic science has been an inexact art, but now a team of physicists is bringing concrete physics into the picture. In a paper published  here, the team breaks down a theoretical model for analyzing blood stains. The process can be seen in the short video below.

The first thing to observe in the splatter marks is the size of droplets, frequency, placement, and shape. This can give analysts more data on velocity when the drop hit the wall, and where the origin may have been, according to Gizmodo. From this point, the technician would attach a string to major drops in the direction each drop was believed to have landed. After repeating this action enough, the strings converge in one general area, giving the location of the victim when the crime was committed.

"A parametric study is undertaken to predict patterns of backward blood spatter under realistic conditions corresponding to the experiments conducted in the present work. The results of the model are compared to the experimental data on back spatter generated by a gunshot impacting a blood-impregnated sponge." ~ APS 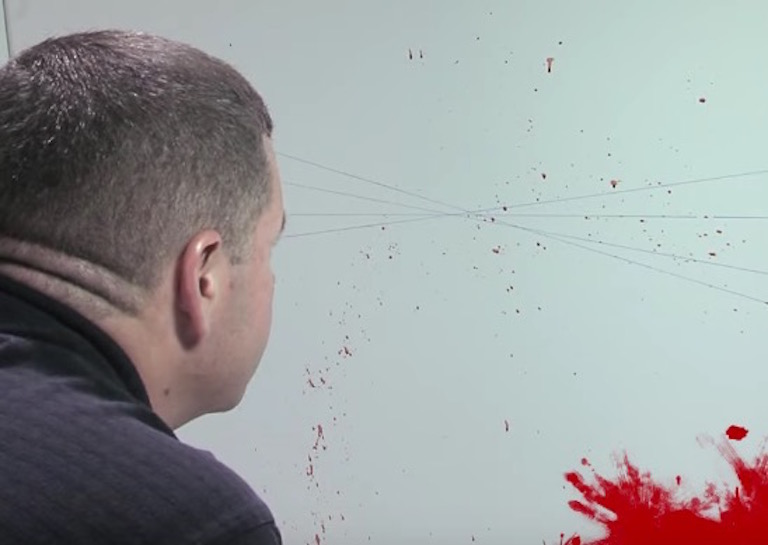 As you may be able to imagine, determining how a droplet of blood traveled through the air when considering air resistance and any other outside effects is rather difficult. The crew was able to come to their physical analysis of blood splatter analysis through carefully examining slow motion footage of pig's blood being shot with a gun. The physical models created from these experiments will be able to more accurately help forensic scientists model each crime committed.