After being leaked last month, a paper detailing NASA's EM Drive finally got peer-reviewed and published.

The peer review implies the "impossible" technology actually works. NASA Eagleworks Labs put out a hypothesis as to how the EM Drive could defy the the laws of physics:

"[The] supporting physics model used to derive a force based on operating conditions in the test article can be categorised as a nonlocal hidden-variable theory, or pilot-wave theory for short."

The EM Drive (short for Electromagnetic Drive) is a propulsion system proposed by Roger Shawyer in 1999. It uses microwaves to bounce inside a conical metal cavity to create thrust. At EM Drive's best, theories propose the technology could get a craft to Mars in less than 80 days.

The drive has been a point of controversy in the scientific community. It blatantly defies Newton's third law of physics which states for every action, there must be an equal and opposite reaction. But if there's no action (burning of fuel), how can there be a reaction (propulsion)? 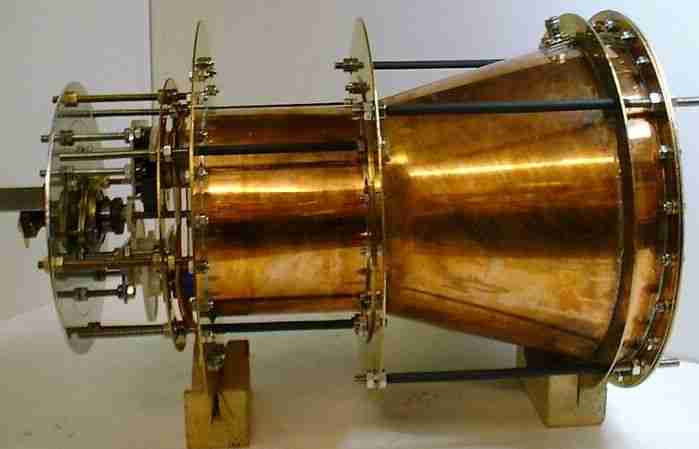 An Australian EM Drive fan leaked the original paper for fear it would never see the light of day. The new peer-reviewed paper, called "Measurement of Impulsive Thrust from a Closed Radio-Frequency Cavity Vacuum," can be read online in the American Institute of Aeronautics and Astronautics journal.

The research team admitted they didn't test the EM Drive for optimal efficiency, just functionality. This could mean that with more work, the EM Drive could become one of the most spectacular feats of engineering ever.

What's next for science's biggest mystery? The EM Drive will get tested in space, which NASA said could happen within the next few months. If it works, the success wouldn't just impact space discovery but engineering overall.

The hypothesis given by the team was generated after one round of testing. However, the work looks extremely promising, as this is the first paper ever peer-reviewed on the EM Drive. This takes technology out of the theoretical and into the practical, even if we don't yet understand exactly why it works.