Check Out This Eerie Toxic Ghost Town in Oklahoma

Welcome to the Picher, most toxic abandoned town of the Oklahoma, United States.

Don't let Picher's looks fool you. The city once boasted the biggest zinc mine in the world. Over time, the lode ran dry and the mining companies moved out in 1970.

But it left a huge problem behind: toxicity.

The town came to prominence in 1914. It supplied the increased demands of ammunition during the First and Second World Wars. The zinc sourced by Picher mines played a big role through the war. It went to create stronger and water-resistant metal alloys, dietary supplements and better batteries.

Zinc is the 24th most abundant chemical element in the world. It covers up about 75 ppm (0.0075%) of Earth's crust. Humans have used it since ancient times because of its importance to the human body and industrial fields.

"What actually came out of the ground was crude ore, sedimentary rock laced with valuable metals. To break it apart, miners simply reversed the geothermal processes that created it: They crushed and sorted the ore in nearby mills, then superheated it in a giant smelter to melt away any impurities."

Picher has been an epicenter of zinc mining. The Picher Lead Company ran hundreds of mines. Thousands of locals toiled in the mines and the population grew. The population topped at 14,000 in 1926, but no one expected the lode to run out so quickly. However, even during the descent of Picher, residents began noticing issues:

"Kids started coming home from swimming in ponds near the mines complaining of what they thought were sunburns, never realizing that the pools were full of caustic chemicals. And most of the mining companies that might have been held responsible were either bankrupt or disbanded."

Now, the Picher is a dead city. Except a few locals, most of the residents had to leave their town under orders at 2009.

The Army Corps of Engineers determined most of Picher's homes were in both physical and chemical danger, as mines ran under homes.

According to Ben Paynter, a journalist who traveled around Picher in 2010:

"What was left after the valuable minerals had been extracted—useless residue on a vast scale—piled up outside the mines, a 7,000-acre ridgeline of fine-grained chat dappled with mill ponds and surrounded by a shale prairie. The water pumps were shut off when the mines closed; their subterranean chambers refilled with groundwater and leaked acid into nearby Tar Creek, threatening the town’s drinking water. Sinkholes opened under streets and houses. Heavy metal dust from chat piles choked the air."

According to the scientists, a condition called zinc chills could be induced by inhalation of zinc fumes while brazing or welding galvanized materials. Elderly men regularly exposed by 80 mg zinc daily were hospitalized for urinary complications. 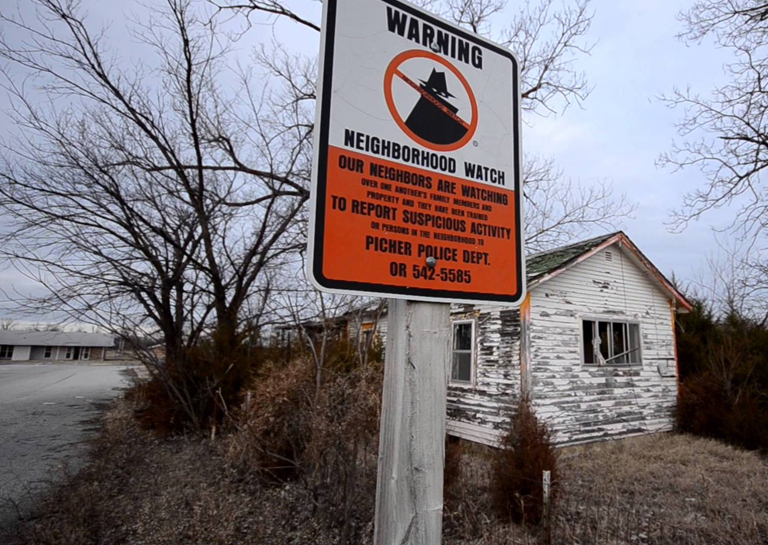 However, some locals with deep roots still call Picher home.