Commander David Fravor saw a wingless aircraft during a 'routine' mission that then whizzed away. U.S. government officials are now verifying his story.

By  Shelby Rogers
Dec 17, 2017
To the Stars Academy of Arts and Science/Youtube

In 2004, Commander David Fravor thought he would just be conducting a standard training mission off the coast of San Diego. What happened was way more mysterious, and now a story that needs to be told.

Fravor and another pilot Lt. Cmdr. Jim Slaight were flying their routine training mission over 100 miles out into the Pacific ocean. During the flight, a radio operator asked him to investigate a white floating object hovering over the sea. Fravor flew toward what he described as a 40-foot, oval-shaped object. According to Fravor in an interview with the New York Times, the objects appeared at 80,000 feet and then 'hurtled' toward the sea before stopping at 20,000 feet and hovering.

Then, Fravor recalled, the object (or objects) disappeared.

"It accelerated like nothing I've ever seen," he told the Times, adding that he was "pretty weirded out," and that although he had no idea what he saw, all he could tell was that "it had no plumes, wings or rotors and outran our F-18s."

The Group Behind the Research

"It is white, oblong, some 40 feet long and perhaps 12 feet thick…The pilots are astonished to see the object suddenly reorient itself toward the approaching F/A-18," Mellon said. "In a series of discreet tumbling maneuvers that seem to defy the laws of physics. The object takes a position directly behind the approaching F/A-18. The pilots capture gun camera footage and infrared imagery of the object. They are outmatched by a technology they’ve never seen."

As the New York Times staff pointed out in the story's introduction, "not knowing the explanation does not mean that the event has interstellar origins."

Politico developed a report that released around the same time. One former Pentagon staff member told Politico on the condition of anonymity that a foreign power could've developed next-generation technologies. 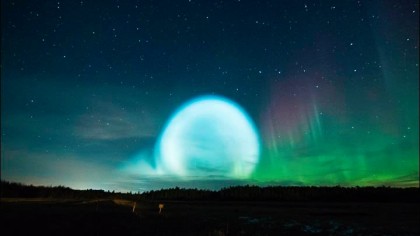 "Was this China or Russia trying to do something or has some propulsion system we are not familiar with?”  said the unnamed staffer.

Luis Elizondo served as the career intelligence officer who ran the initiative. He told Politico that in his resignation letter, the research being conducted by the institute was not being taken seriously.

"We tried to work within the system," Elizondo told Politico. "We were trying to take the voodoo out of voodoo science."

Elizondo also spoke about Fravor's encounter in a recent interview.

"They [the mysterious crafts] did not exhibit overt hostility,” Elizondo explained. "But something unexplained is always assumed to be a potential threat until we are certain it isn’t. On the bright side, I believe we are closer than ever before in our understanding of how it operates."