Another pilot whale becomes the latest victim condemned to live in an environment poisoned by human contamination.

It is another sad week in marine news after a five-day rescue operation ended with the loss of a pilot whale who was discovered to have ingested 8 kilograms of plastic bags.

The whale was discovered barely alive in Thailand near the Malaysian border on Monday. Rescuers tended to the whale for days as they held its shuddering, yet slowly dying body. Despite the five-day rescue operation, the whale eventually succumbed to its illness.

A post recently made by the Department of Marine and Coastal Resources reveals the distress the animal endured in the last moments of its life. In its last moments of life, the whale vomited up five of the plastic bags.

An autopsy revealed 80 plastic bags inside the whale’s stomach. The trash collectively weighed over 8 kilograms.

Investigators from the Department of Marine and Coastal Resources shared the horrific photos on Facebook showing the black bags which lead to the fate of the whale.

“If you have 80 plastic bags in your stomach, you die,” said Thon Thamrongnawasawat, a marine biologist, and lecturer at Kasetsart University. He added that at least 300 marine animals, including whales amongst others, are killed each year in Thai waters due to plastic ingestion.

Why Are Fish and Other Creatures Eating Plastic Bags

The problem lies in the shape of plastic bags. When inflated with water, plastic bags can resemble squid, a pilot whale favorite. Ingesting plastic bags wreaks havoc on the digestive systems of whales, resulting in lesions, blockages, or rupturing organs entirely. In the case of the recently deceased male, its death was a result of its inability to properly digest any food.

But the issues stem beyond the direct health complications which arise from the buildup of indigestible material inside the stomachs of whales and other creatures. The plastics build up inside the stomach, giving ample room for bacteria to grow and thrive.

“Ingestion of plastic can sometimes lead to the animal’s death or progressive wasting with waning health and reproductive problems. Plastic pieces are substrates that increase the risk of attachment and introduction of invasive species that may compete with native species and disrupt the ecosystem,” said Catherine Couillard, head of ecotoxicology research at the Maurice Lamontagne Institute (MLI) of Fisheries and Oceans Canada.

In a nutshell, the plastic creates a lot area for bacteria to grow - bacteria which may further intoxicate the creature.

Every year, millions of other sea creatures succumb to similar fates from ingesting plastic. Just one bag lives long enough to claim the lives of multiple creatures. After a plastic bag claims a life, the creature will decompose, but the bag will likely remain behind, unleashing it once more to the open waters.

More than 8 millions tons of plastic is dumped into the oceans annually. Plastic is making its way into every corner of the globe - even in the deepest regions of the ocean - inside the Marianas Trench where researchers recently discovered plastic trash.

Humans are choking the oceans with plastic - but it is not too late. Many organizations have begun cleaning the oceans, pulling our trash from our neighbors' homes.

The Best Cure is Prevention

Unfortunately, it is impossible for a handful of organizations to make a major impact by removing trash from the ocean alone. While they serve good in what they do, ocean cleanup organizations are pushing beyond a temporary cure. 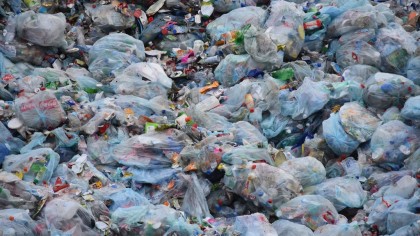 Cleaning the oceans will not solve the issue. Plastic is the problem, and without changing the intimate relationship between humans and plastic, it will continue to make its way into the world’s oceans.

Humans have reached a point of where we are not only are we responsible for polluting the ocean, but we are obliged to repair and reverse our wake on the ocean. There is no immediate cure, and prevention is likely the best course of action.

Single-use plastics need to be phased out universally. Governments must hold companies responsible for the irresponsible and unnecessary integration of plastic into nearly every aspect of life. Recycling must be mandated. And all of these need to be implemented yesterday.

Protecting Humans (and the World) From Humans

Human rights are protected, and so should be the home in which we reside alongside countless species who called it home long before. Polluting the ocean is reckless, and if killing innocent marine life is not a great enough deterrent, it is already impacting human health.

Polluted water supplies and contaminated food chains are proven to cause kidney damage, nervous system damage, and reproductive problems among many other complications, many of which we may not yet even know.

Without immediate action, millions of more animals face an impending doom. While the recent whale discovered in Thailand with 8 kilograms of plastic in its stomach is only one creature, it sheds light on the sheer magnitude of the problem with plastic.