New research reveals that the collision between the Earth and another proto-planet that created the Moon 4.4 billion years ago also left behind the building blocks of life.

In new research published this week, scientists have found strong evidence that the essential elements for life were deposited on Earth after it collided with the proto-planet that carved out the Moon.

Early Earth in Want of Some Essential Ingredients

In the cosmic pinball arcade that was the early solar system, the proto-planets of the inner solar system absorbed the impacts of planetoids and asteroids over a couple of billion years to bulk up and form the four rocky worlds around the Sun.

Of these four, Earth is the only one known to have developed life, and the chemical composition of the planet is even more important than its distance from the Sun.

The essential elements that make life on Earth possible are not native to Earth, however. Known as volatiles, these elements are known to have an extra-terrestrial origin. “From the study of primitive meteorites, scientists have long known that Earth and other rocky planets in the inner solar system are volatile-depleted," said Rajdeep Dasgupta, Professor of Earth, Environmental, and Planetary Sciences at Rice University and co-author of the study.

"But the timing and mechanism of volatile delivery has been hotly debated. Ours is the first scenario that can explain the timing and delivery in a way that is consistent with all of the geochemical evidence.”

Carbon, Nitrogen, and Sulfur: The Elemental Spices of Life 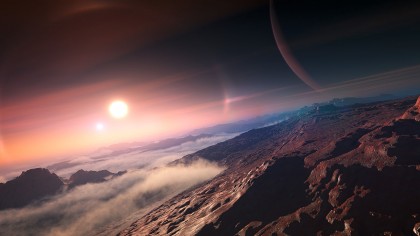 Graduate student and lead author of the study, Damanveer Grewal, gathered evidence in Dasgupta’s lab, which focuses on studying the geochemical reactions that take place in a planet’s core, an environment of unfathomable pressure and heat.

Grewal focused on testing the theory that a proto-planet with a sulfur-rich core smacking into the primordial Earth could have contributed the essential ingredients for life that the Earth lacked. The sulfur-rich core is important because of the puzzling evidence found in the ratios of carbon, nitrogen, and sulfur in the Earth’s non-core material—known as bulk silicate Earth.

The idea that smaller, leftover material from the outer reaches of the solar system impacted the Earth and deposited these elements has long been the best theory anyone’s had for how these elements found their way to Earth.

The problem with that theory is that while these objects, called carbonaceous chondrites, contain these elements, their ratios do not match what is found in the bulk silicate Earth. There’s nearly twice as much carbon than there would be if these elements came from these objects.

A proto-planet with a sulfur-rich core, however, was a different story.

Grewal decided to test whether a dense sulfur core would effectively keep carbon and nitrogen out of the core of the planet, producing a much higher carbon content in the proto-planet's bulk silicate material.

Using these results, Dasgupta, Grewal, and Chenguang Sun—a postdoctoral researcher at Rice—crafted a computer simulation that modeled the chaos of the early solar system and ran it around a billion times. They then looked through the results to see what could have caused the chemical ratios in Earth bulk silicate.

The prime candidate would have been a proto-planet the size of Mars with a sulfur-rich core striking the Earth about 4.4 billion years ago, right around the time the Moon was carved out of the early Earth by a massive planetary impact.

“This study suggests that a rocky, Earth-like planet gets more chances to acquire life-essential elements if it forms and grows from giant impacts with planets that have sampled different building blocks, perhaps from different parts of a protoplanetary disk," said Dasgupta.

He added, "this removes some boundary conditions. It shows that life-essential volatiles can arrive at the surface layers of a planet, even if they were produced on planetary bodies that underwent core formation under very different conditions."

Could Metal-Binding Proteins Have Been the Origin of Life on Earth?