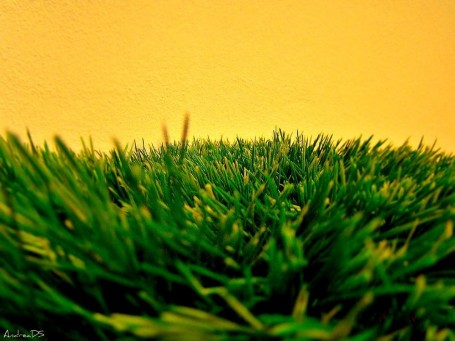 The new wind-generating plastic grass could look something like this once it is fully developed [Image Source: desalvea, Flickr]

China is regularly knocked for its environmental record. Wrongly, as it happens. In fact, the country is now ahead of the US in terms of its renewable energy development and deployment and Chinese innovation in clean energy is a regular source of some pretty amazing technology.

One such development is a form of ‘plastic grass’ that has just been developed by scientists at Southwest Jiatong University in Chengdu. The research team at the university, led by Zhong Lin Wang, has developed a new form of triboelectric nanogenerator (TENG), a technology that converts mechanical and/or thermal energy into electricity. Nanogenerators operate along three typical approaches – piezoelectric, triboelectric and pyroelectric, of which the latter is concerned with harvesting thermal energy and the former two approaches harvesting mechanical energy. TENG’s consist of vertically free-standing strips made from polyethylene terephthalate (PET) thin film, coated with indium tin oxide (ITO) on one side and nanowires on the other, thereby enabling the electrons to jump between the two materials, a process known as the triboelectric effect.

According to the team’s research study, published in the journal Advanced Materials, TENG-based wind energy harvesters have been developed elsewhere. However, thus far, although these have similarly used wind-induced membrane vibration to generate electricity, they can only be used when the wind was blowing in a certain direction. The problem with this is that most wind currents do not have a constant direction and indeed the wind direction may even change over time, thereby making these harvesters largely unusable. The aim of the project therefore was to tap the energy from erratic gusts of wind, commonly found in urban areas, as well as from steady winds.

Instead, the Southwest Jiatong University research has developed a more flexible TENG that harvests energy from natural wind at arbitrary wind directions.

“Compared with a wind turbine, our triboelectric nanogenerator (TENG) is effective at harvesting the energy from natural wind blowing in any direction” said team member Weiqing Yang, speaking to The New Scientist, adding that the polymer thin film materials used in the device enable it to become available at low cost while being easy to fabricate and scale up.

The flat array of each TENG has a structure (morphology) similar to that of a kelp forest – underwater areas in which kelp seaweed thrives in high density ‘forests’ that have long been recognized as one of the most dynamic ecosystems on the planet. Within this morphology, the single strips can potentially sway independently, thus producing a contact-separation process in response to passing wind currents.

The Chinese team used a high-speed camera to capture the working states and interactions between two adjacent TENGs. The vertically free-standing polymer strips produced a vibration frequency of 154 Hz in response to wind currents, thereby assuring a sufficient level of contact-separation for high electric output. Using a 10 x 2 cm strip subjected to an airflow velocity of 27 ms-1, the team found that two adjacent strips covering a rooftop area of 2 x 0.7 cm can deliver an open-circuit voltage, short-circuit current and power density up to 98 V, 16.3 µA, and 2.76 Wm-2, enough to light an advertisement hoarding.

The team deployed an array of TENGs on a rooftop, consisting of 60 strips, in order to harvest more energy from the wind. This produced a power density of up to 2.37 Wm-2, representing enough electricity to simultaneously light up 60 LED bulbs connected in series. According to team member, an average house with a rooftop area of about 300 square metres and ten-layered lawn structured TENGs could deliver an expected electrical energy of 7.11 KW, corresponding to a power density of 23.7 Wm-2.

The study demonstrated the ability of TENGs to act as substantial power sources for home electronics, representing a novel form of wind-generated electricity as well as an important step towards self-powered electrical technology in the home. Thus far, the device has only been tested in the lab but it works at a minimum wind speed of 21 kilometers per hour while the most useful wind speed for power generation is almost 100 km/h (storm force 10).

Another researcher working on energy harvesting at the University of Campinas in São Paulo, Brazil, Fernando Galembeck, explained to The New Scientist that such a wind is neither realistically available nor desirable. Furthermore, there is still a long way to go before these types of devices start to appear on people’s rooftops. Galembeck also emphasizes that there will still be a need for energy storage, for the same reasons as it is needed for other forms of wind-generated power. The Chinese team are researching storage solutions and they are also planning to integrate the TENG with solar panels as a means of boosting its performance, yet Galembeck is also critical of indium tin oxide, because of its poor mechanical qualities, cost and toxicity, advising that further research needs to explore other materials.

A New Wind Power Wall Could Produce Over 10,000 KWh a Year