The field of composites used in construction and engineering has grown in recent years as the chemical manufacturing industry has diversified. Polymers and other plastics have begun to be more widely accepted as traditional aggregate substitutes in concrete construction. With this expansion comes the addition of certain thermal and mechanical properties in various composite concretes. Specificially, Polystyrene concrete (Epscrete), has been making appearances across the internet being displayed for its unique abilities. Mixing of the polystyrene composite is almost exactly the same as traditional concrete mixing with the exception of replacing larger aggregates with shredded polystyrene granules.

Polystyrene is found in soft foam insulation as well as many commercial packaging applications. Once used for its intended purpose, the chemical becomes incredibly hard to recycle, and due to its hydrophobic nature and low density, it can cause problems in traditional landfill environments. Through a green perspective, the recycling of polystyrene into concrete keeps the material out of landfills.

One of the main reasons that the concrete has been advancing in frequency of use is its impressive thermo-insulative abilities. On the high end, certain mixtures of the composite can achieve R-values upwards of 7.8 to 8.2 according to ORNL testing, matching or even beating other insulation alternatives. Aside from having useful insulative properties, the concrete which is traditionally manufactured in various block forms, can hold its weight in small scale construction. Used in exterior walls, the material can severely diminish or eliminate the need for traditional interior insulation techniques. 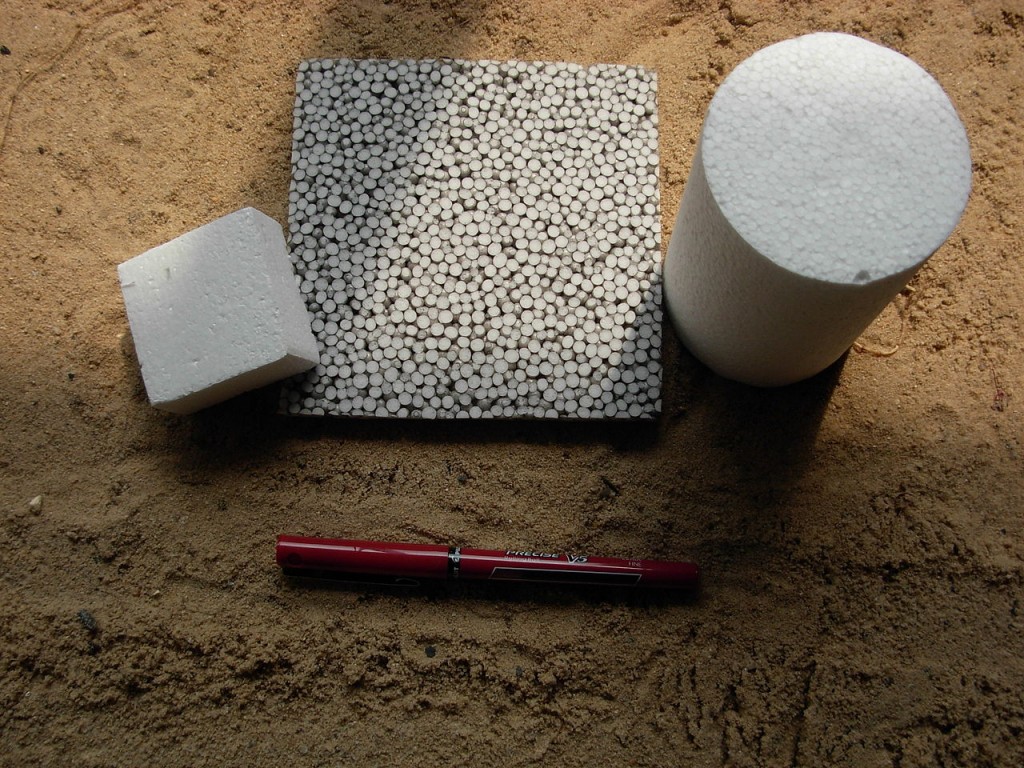 The manufacturing process is simple as well, other than the need to work in a well ventilated area during mixing and grinding of the polystyrene. Foam waste is ground into small granules (Nominal Diameter varies largely upon application) then mixed with part of the additive water. This is done to decrease cohesion between the particles and make mixing easier. In dosed additions, water, polystyrene, Portland cement, and silica sand aggregate are added to the mixer. Mix proportions vary by manufacturer but can be expected to mirror standard ratios.

A finished polystyrene block matching in dimensions to a standard cinder block can weigh up to 10 times less. Due to the elastic nature of the polystyrene foam, the composite can withstand significant tensile stress in comparison with regular aggregate concrete. While bouyancy is not traditional property in concrete, nor useful in the industry, this composite does float. However it takes very little load to submerge, so it is not used in marine or floating pier construction applications.

Lending itself mainly to precast shapes, the composite can also be cast into monolithic forms on site. Form work is still required but the support for such does not need to be as robust due to the low weight and density of the cast structure. One advantage to using this material is it does not require vibro compaction or other in-situ compaction techniques while pouring.

As the construction industry continues to advance, construction materials will become more eco-friendly and engineers will have the capability to pick and choose mechanical and chemical properties in their desired material. Instead of having to work around the available materials, various composite structural components will be available to the building process.

Under Pressure: How Concrete Beams React to Being Bent

9 of the Oddest Alternatives to Money