With drones becoming increasingly prevalent in recreational and professional fields, drone crashes are also becoming more common. Whether it is due to a freak accidents, or pilots that don't know what they're doing, drones are crashing into people. As this problem increases, drone companies are crash testing their devices more and more in order to minimize human damage. Sometimes the best human stand-in is a pork roast, and that is exactly what these companies and research labs are using. Check out the slow motion video below of a drone blade impacting a large pork butt.

If there was ever list a videos you weren't expecting to watch, a spinning plastic blade crashing into a pork roast would probably make the list. Believe it or not, this research actually provides useable data to drone manufacturers that will help make their technology safer for consumers. Aalborg University's Drone Research Lab in Denmark is conducting this research, and they are pioneering the knowledge in drone crash testing according to Tech Radar.

Essentially, a drone will be attached to the aluminum trolley and then catapulted towards the medium being studied. The test shown in the video was for a relatively small drone, but the research lab is hoping to scale their technology up to test for much larger devices. Currently the maximum speed of the drone testing equipment is 15 meters per second, which is representative of most drone crashes. 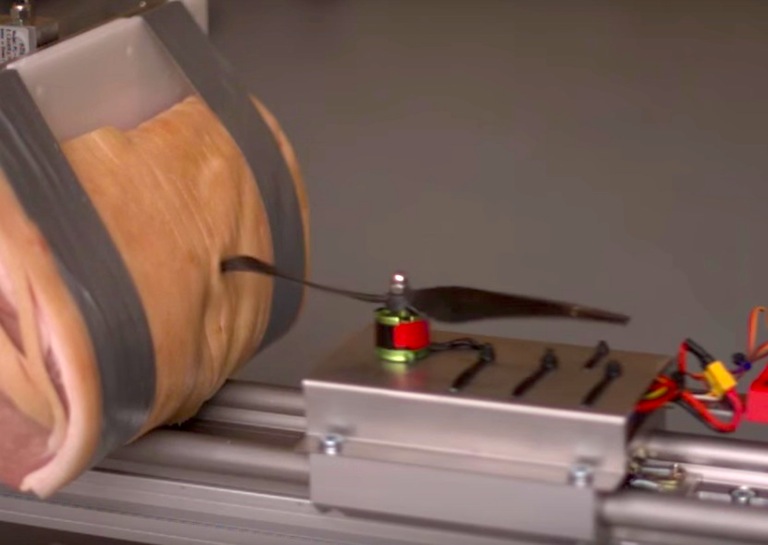 As new technologies are pioneered, there are often entire industries devoted to making sure they are safe, and protecting the general public. In case you were needing a human substitute for some experiment you were doing, you too can use a pork butt for testing, as they are actually pretty great human substitutes. Engineering can bring you to some pretty interesting places, like building a rig to ram spinning drone blades into pieces of pig.

A drug once used to treat alcoholism may cure retinal degeneration

The Silurian hypothesis: Was there a civilization on Earth before humans?