Oliver Blume, the CEO of Porsche, confirmed the launch date of their first ever luxury EV at the Frankfurt Motor Show.

The year 2020 seems to be the deadline for a vast amount of green innovations. In fact, 2020 is the aim for mega city members of the C40 summit to deliver on the promise of limiting the rise in global temperatures to less than 2 degrees Celsius. It’s also the year Elon Musk aims to conquer self-driving cars by and China vows to have 12% of their cars fully electric.

Another promise to look forward to by 2020 is the rollout of Porsche’s Mission E, a luxury EV and rival to Tesla’s Model S. Porsche CEO Oliver Blume stated that the vehicle would be ready for the road in 2019. “We are in series engineering phase,” he told CAR magazine. 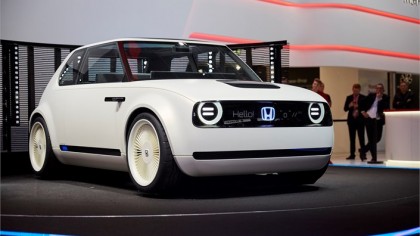 “You either take part in the digital change, or you lose.” Porsche labor boss Uwe Hueck told Reuters in an interview.

Porsche’s contribution was among the lot with the return of their Mission E, which was first debuted as a concept car at the 2015 Frankfurt show.

“With Mission E, we are making a clear statement about the future of the brand,” Porsche board chairman Dr. Wolfgang Porsche, said in 2015 at the event. "Even in a greatly changing motoring world, Porsche will maintain its front-row position with this fascinating sports car.”

It can charge twice as fast as the quick-charge systems on the market right now, taking only 15 minutes to charge to 80 percent. Monetarily its designed to plug the gap between the Panamera and 911 with its price of $80,000.

Inside the cabin, Porsche added built-in eye-tracking technology that detects where the driver is looking and can identify which button on the dashboard the driver wants to use, it pops up and with a simple push, the selection is confirmed.

The production project for this car has added benefits for the German employment rate as well, with the plan promised to create 1,400 new jobs at Porsche’s Stuttgart-Zuffenhausen base. Around €700m are being invested in the site, with a new assembly plant on the way and the engine factory is being expanded and adapted for the manufacturing of electric motors. The job total includes 900 production staff, 300 salaried workers, and 200 engineers.

All in all, Porsche is going to spec $1.1 billion to make Mission E a reality. 2020 should be a very good year indeed.