A new cocktail from Thailand that mixes anti-viral, flu, and HIV medication has seen improved condition of patients suffering from the new coronavirus.

Doctors in Thailand have seen successful results in treating severely-affected patients of the rapidly-spreading coronavirus with a triple-cocktail of anti-viral, flu, and HIV medication, according to a Reuters report. Although in the early stages, it could be our first glimpse of a cure.

A new treament for the Wuhan coronavirus

The patient who received this new treatment was an infected Chinese woman from Wuhan—the source of the coronavirus—who seemed to improve drastically, said Thailand's health ministry on Sunday.

It took a mere 48 hours post-treatment for the 71-year-old Wuhan native to test negative, according to Dr. Kriangska Atipornwanich, who spoke at the ministry's press briefing. The woman was previously admitted to Hua Hin Hospital, and later moved to Rajavithi Hospital on Jan. 29. She had tested positive for coronavirus for 10 days, but after exposure to the cocktail, she improved.

However, the doctor was quick to discourage jumping to conclusions that the results are a veritable cure-all.

"This is not the cure, but the patient's condition has vastly improved. From testing positive for 10 days under our care, after applying this combination of medicine the test result became negative within 48 hours," said Atiporwanich.

Fighting the Wuhan illness to stop a pandemic

This comes days after Japan's National Institute of Infectious Diseases successfully cultivated and isolated the virus—a testament to the efficacy of the world's medical community.

Of course, Chinese health organizations had actively administered anti-viral, flu, and HIV medication to combat the coronavirus. But the new triple-cocktail combines all three, and could be key to reversing the rapid spread of the greatest viral threat since SARS in the early 2000s.

The New York Times reported that health experts feared the new virus might become an actual pandemic, which is an epidemic that spreads to two or more continents.

Where we go from here: treating the new virus

The director-general of the Medical Services Department of Thailand, Somsak Akkslim, said severe cases were prioritized for the new treatment. Another doctor who applied the same treatment to two more patients said that one had an allergic reaction, and the other showed signs of recovery.

"We have been following international practices, but the doctor increased the dosage of one of the drugs," said Akkslim, with reference to the flu medicine called Oseltamivir.

So far, there are 19 recorded cases of the virus in Thailand. Of these, eight have improved and returned home, while 11 are still undergoing medical treatment in hospitals.

While it's too soon to call the crisis off, we can—for the moment—take a breath. 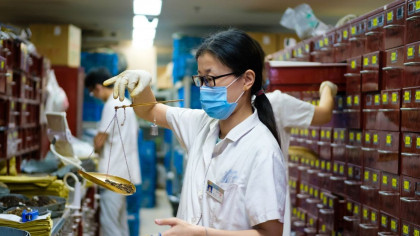