A young researcher is transforming bacteria into biofuel.

Most people associate E. coli bacteria with diarrhea or worse. But Louisiana State University researcher Tatiana Mello is using it to create new bioproducts like biodiesel.

Mello is using the potentially dangerous bacteria to first create a new kind of feedstock that can be used to expand biodiesel production in the US.

“The main feedstocks used in the U.S. for biodiesel are soybean and corn oil,” she said. “The actual production is enough to feed us, but you have the surplus that nobody knew what to do with, so biodiesel was created. This market is growing and growing. They expect within a few decades, the surplus won’t be enough to produce biodiesel. E. coli is cheap and abundant, and you can just genetically modify it to fulfill this need.”

Mello is interested in creating Malonyl-CoA bioproducts, such as biodiesel, plastics, polymers, and pharmaceuticals. Malonyl-CoA is an enzyme found in bacteria from humans and plays an important roles in regulating fatty acid metabolism and food intake. “Malonyl-CoA maximization is the topic of my research because it’s a precursor for so many things,” Mello explained.

Mello’s work is making waves within the biodiesel field. She recently presented her research at the National Biodiesel Conference and Expo in San Diego. 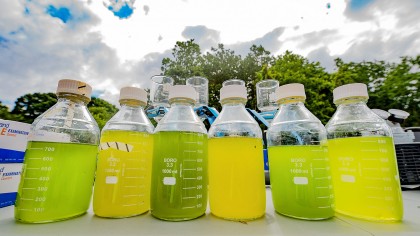 As a young researcher Mello told on-campus media that the experience was far more valuable than expected. “I was opened up to a new world after the misconception about the food industry and the biofuel industry competing for cropland was demystified,” Mello said.

“The many new concepts, regulations, and issues presented during the fast-paced event prepared me much better for the entire biodiesel business.” Mello began her science career with a biology undergraduate degree in Brasil and is now happily continuing her work in the US.

“First I got into biology because I was all about studying life,” she said. “It fascinated me. When I was finishing my biology degree, I realized I couldn’t apply anything to what I was studying. Those were the engineers. I needed bioreactors and machinery. So, I decided to get an engineering degree.”

The research will scale up to meet industry appetite

Mello says she is now looking for corporate partners that will assist her to scale up her research and make it applicable to the gigantic agricultural industry. Biodiesel is a growing area of research that may be key to weaning us off fossil fuels.

One common way of producing biodiesel is through agriculture crops. These so-called energy crops include wheat, corn, soybean, and sugarcane.

Biofuels burn cleaner than fossil fuels, release fewer pollutants and greenhouse gases, such as carbon dioxide, into the atmosphere. They are sustainable and energy companies mix them with gasoline. Unlike oil, coal or natural gas, biofuels, in theory at least, are renewable. But as arable land becomes scarcer, research into other alternative sources of fuel like algae and bacteria is on the rise.

Drone Regulations Go into Effect in the European Union

Researchers Turn Paper Into Electronic Controllers With No Battery