Desert Eagle 50: How Powerful is it Really?

The Desert Eagle is famed as one of the world's most powerful handguns, but is it really? Let's take a quick look at this fearsome handgun.

By  Christopher McFadden
May 28, 2017
Brandon Motz/FLICKR

The Desert Eagle 50 is probably one the best-known handguns of all time. It has made a lot of appearances in films, computer games and popular culture for many years.

If you've ever watched Last Action Hero, Snatch and Lock, Stock and Two Smoking Barrels, you've seen it in action, in fiction at least.

Although some revolvers can deliver a higher velocity, this handgun is about as powerful as a semi-automatic handgun gets!

Let's see if all the hype lives up to reality. It is after all claimed to be one of the "most powerful handguns".

The gun's patent was filed in 1983 by Magnum Research and Riga Arms Institute. This patent laid down the basic plans for the Desert Eagle as a gas-actuated pistol. Much like the famous AK-47.

This patent was refined in 1985 after Israel Military Industries (IMI) had refined the weapon's designs. The Desert Eagle's basic concept is that the gun is fired using a single action hammer and has a manual side "safety" switch on the slide.

What makes the Desert Eagle 50 so potent is its use of a gas-operated mechanism to reload that you would normally expect to find in a rifle. Most semi-automatic handguns tend to utilize short recoil or blowback designs.

Effectively this uses gas ported from a fired round to assist a new bullet to be loaded into the firing chamber. Without going into too much detail, this system allows the gun to use more powerful cartridges than other semi-automatic handguns.

Because it is gas operated the barrel can be fixed in position just like rifles. The barrel also boasts a six-rib polygonal rifling like medium bore Glock pistols. For this reason, the Desert Eagle 50 does indeed deserve its "infamy" as a very powerful handgun.

So much so that both  Magnum and Desert Eagle are often mentioned in the same sentence as notoriously powerful revolvers!

The Desert Eagle's design is such that guns can be readily converted between .50 and .44 calibers with relative ease. You only need to switch out the barrel, bolt assembly, and magazine.

So does it live up to the hype?

You've seen from the gun's design that it is elevated above most semi-automatic pistols for one key reason. The size of the bullet it can fire. The very fact that this gun is able to handle 0.50 caliber rounds certainly does give it some "bang for your buck".

As an aside 0.50 caliber is the largest "legal" caliber allowed for a handgun in the U.S. Its magazines can go from 0.357 to 0.50ae where smallest has 7 bullet capacity and largest 9 bullet capacity.

Don't be fooled by these small numbers because you can do some serious damage with a full cartridge. Not only can the Desert Eagle 50 handle big rounds it's not a small weapon either.

The average .50 configuration weighs in at just over 2 kilograms or about 4.5 pounds (The Mark XIX to be precise).  That is a pretty big weight for a handgun. 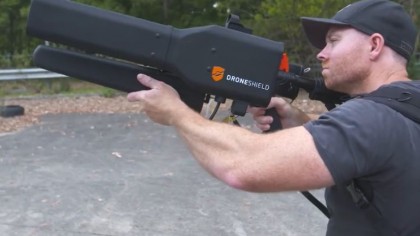 This Gun Takes Down Drones From a Mile Away

Desert Eagle has a long history. The first model, The Mark I usually had a steel frame and is no longer produced. The Mark VII added an adjustable trigger and it also introduced accessories.

The later model would add Weaver-pattern rail. When the company decided to create a new series, they focused on a product that would cater to everyone.

With The Mark XIX, you are able to change custom parts and pick a cool finish such as the one in gold or black. The iron sight was also a nice feature.

Reviews from the gun users show that it is challenging to master. Though it is certainly fun to fire by all accounts.

It does suffer from frequent jamming, at least for the inexperienced welder but its fame seems to be more due to its glamor than actual functionality.  That being said the gun is a very powerful handheld firearm.

Now you'll probably see a lot of videos testing guns and ammunition against various targets. Often they tend to involve fruit, for some reason.

In a lot of games and films, you may even see it being used to shoot and disable car engines, blow through building materials or "open" locked doors.

There is even a meme that suggests .50 caliber rounds can be used to shoot an intruder through a refrigerator in your neighbor's house.

Is this true? The following video basically involves the Desert Eagle and .50 ammo to see if its true.

Well, it certainly can nail fruit. And it seems to make short work of a refrigerator, this meme might have some "legs".

It can be argued that this penetrating power is more to do with the size of the bullet and the amount of gunpowder it packs rather than the gun.

But remember that the gun's design enables the weapon to accommodate and actually fire rounds of this size.

Plus don't all handguns, in fact, all firearms' power, rely in the end on the type of projectile they use?

The Desert Eagle was primarily developed for use as a battlefield weapon rather than one for self-defense or casual use.

It represents one of the best tactical handguns when it comes to high penetration. Its power, when loaded with .50 AE ammo, can conceivably allow the user to defeat personal body armor and even penetrate cover like walls.

Holy cow, don't believe us? Watch it obliterate some rocks!

The Desert Eagle has quite the cult status. It has many notable appearances in popular culture like films and video games and is undoubtedly a fearsome handgun.

When configured and loaded with .50 AE ammunition the weapon has some serious penetrating power. We have seen how it can rip through fridges and obliterate rocks with relative ease.

Power aside the weapon seems fairly useless for the casual user at a gun range or indeed as a weapon for self-defense. You might as well carry a rocket launcher around with you.

The Desert Eagle 50 is a very heavy and cumbersome handgun but certainly a very powerful one. Most experts view it as a clumsy piece but there is also case to be made for purchasing it.

So what do you think? Is the Desert Eagle more bark than bite? Does it live up to its reputation as one of the world's most powerful handguns?

Have you ever fired one or do you own one? We'd love to hear your stories and experience so please feel free to share them in the comment section below!