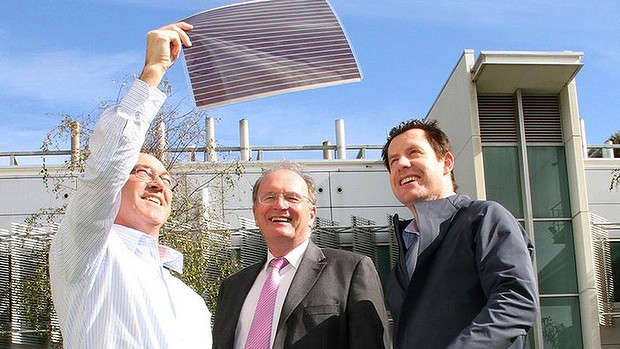 Thin flexible solar cells that can be printed may be able to offer the world a further reduction in solar energy costs and have a range of other benefits, such as being much easier to transport than conventional solar panels, particularly with regard to solar energy projects in remote locations. The efficiency of these more flexible materials is improving as well, increasing from around 3 percent efficiency to 20 percent efficiency over just a few years.

Printed electronics first appeared in 1903 with Albert Hanson’s “printed wire” patent, however it was radio technology that subsequently dominated the printed electronics industry forward until inkjet printers were developed in more recent times. The electronics industry has increasingly favoured inkjet printing because of its low cost and flexibility and one of the main products of this process has been the printable solar cell, the first of which appeared in 2008, produced by Konarka. This was followed in 2011 by Oregon State University which used the process to produce Copper Indium Gallium Selenide (CIGS) solar cells and also by the Massachusetts Institute of Technology (MIT) which created a solar cell on paper. In general though, the use of inkjet printing for solar cell printing is still very much a new and developing process and therefore still very much in the research stage.

In Australia, the Commonwealth Scientific and Industrial Research Organisation (CSIRO) is developing a range of new materials and processes in order to produce thin, flexible solar cells based on printable ‘solar inks’. The inks are deposited on to flexible plastic films using processes such as spray coating, reverse gravure, slot-die coating and screen printing. Other processes being developed by CSIRO, including organic photovoltaics (OPV) and dye-sensitised solar cells (DSSC) also offer greater flexibility and affordability, enabling solar panels to be integrated into windows, window furnishings, rooftops and also, potentially, consumer packaging. In addition to making solar more affordable, these lower cost and light weight solar materials may also be able to supply the energy needs of communities in remote areas and in developing countries.

Research and development of these kinds of materials has been carried out by Victorian Organic Solar Cell (VICOSC) Consortium, a research collaboration between CSIRO, Monash University, the University of Melbourne, BlueScope Steel, Innovia Films, Innovia Security and Robert Bosch SEA. The work is supported by funding from the Victorian State Government and the Australian Government through the Australian Renewable Energy Agency (ARENA). In future, these operations will enable new organic materials and solar cells to be incorporated into small-scale devices with conversion efficiencies of around 9 percent.

These CSIRO projects are currently being developed as pilot-scale operations only, involving roll-to-roll printing lines that have successfully fabricated solar modules at sizes ranging from 10cm by 10cm up to A3 size.

“I’ve witnessed first-hand how the technology has enabled urban poor communities in India to access off-grid electricity” says Scott Watkins of Korean firm Kyung-In Synthetic, a company specialising in the manufacture and development of dyes, inks, fine chemicals and other such materials. “Its success is due to its cost effectiveness and simplicity. A 10×10 cm solar cell film is enough to generate as much as 10-50 watts per square meter.”

Nevertheless, there are a number of challenges which need to be overcome before the printable solar cell revolution is able to advance further. The industrial printers needed to produce these cells are themselves expensive, requiring a significant capital investment. Furthermore, printed panels can be vulnerable to moisture and if broken can potentially cause lead contamination. For this reason, Kyung-In Synthetic and other companies are testing new coatings for the cells in order to solve these problems while start-up capital could potentially be generated by community projects and cooperatives.