A video on Instagram shows two Tesla vehicles used as emergency vehicles by a private firefighter company in Ukraine.

Tesla has definitely given the world a new perspective to look at electric cars. The company proved its point that electric cars shouldn’t look ugly and be less powerful, and can perform way better than the gas guzzlers and hybrids currently available in the market. Tesla Model S was the best-selling plug-in electric car in 2015 and 2016, and it didn’t take more time for the company to make to the Fortune 500’s list in 2017. Tesla’s global sales has already surpassed 250,000 units and is growing despite a minor hiccup in not meeting the delivery numbers for Model 3 due to production bottlenecks.

The popularity of Tesla vehicles is only growing and is all the more popular with police departments all over the globe. The Model S is already a police patrol car in Luxembourg and is used as a ‘high-pursuit’ police cruisers by LAPD. The Scotland Yard, London’s police department is already in the process of converting their fleet of 4000 cars into electric, with Tesla being one of the suppliers. The move by the London’s police department is to combat pollution. Apart from being environmentally-friendly, Tesla’s Model S is famous within the police departments for its capability to accelerate from 0 to 60 mph in just 2.8 seconds. Denver PD also converted the Model S into a police car recently, but as a part of their community outreach and events.

Given the high cost of these electric cars from Tesla, such moves might not justify the use of tax-payers money at the moment. Model S and Model X does have the potential to move faster in case of emergency. However, using such expensive luxury electric cars for such applications is highly debatable. 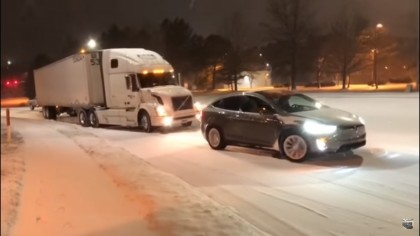 The positive aspect though, out of this, is the world’s gradual move towards adopting transportation means that are less harmful to the environment. With Tesla launching Model 3, the budget EV last year and Volvo’s announcement to introduce only-electric and electric-assisted vehicles by 2019, the market for electric cars is certainly gaining momentum. Tesla is also expanding its network of supercharging stations continuously. Besides, Elon Musk’s army of engineers is also making continuous progress in the company’s autonomous driving system, Autopilot, which is meant to provide zero interaction from the driver when the hardware and software is capable to reach Level 5 autonomy.