The age old dream of running a 1995 Windows operating system on a tiny wrist sized touch screen watch is finally becoming a reality. For those of you that are Apple lovers, you can now run Windows 95, everyone's favorite OS, right on your brand new Apple Watch. Developer Nick Lee is the man behind this ironic application, and surprisingly, the Apple Watch was well suited for the job. All technical specs of the watch far exceed those on computers available in 1995, which just goes to show how far the world has come in little over 20 years.

Even though the watch had the technical specifications to run Windows 95, the programmer still had to figure out how to get the software loaded onto the watch, and bypass Apple's security measures. According to the Verge, Lee had to modify the watch's development software in a "rather unorthodox way." This modification then allowed him to turn Windows 95 into an Apple Watch app, which functions further as an OS emulator.

As the app emulated Windows on an Apple device, this significantly slows down operating and response time. This is because the emulation app essentially has to translate 1995 code into code that function on a 2016 Apple Watch. You can notice some of this slowed response time in the video, as it takes a while for the user to open a game of solitaire. One other thing you may notice in the video is a servo motor attached to the watch's scroll wheel. Lee says this was his way of keeping the screen from turning off while he was loading the OS. 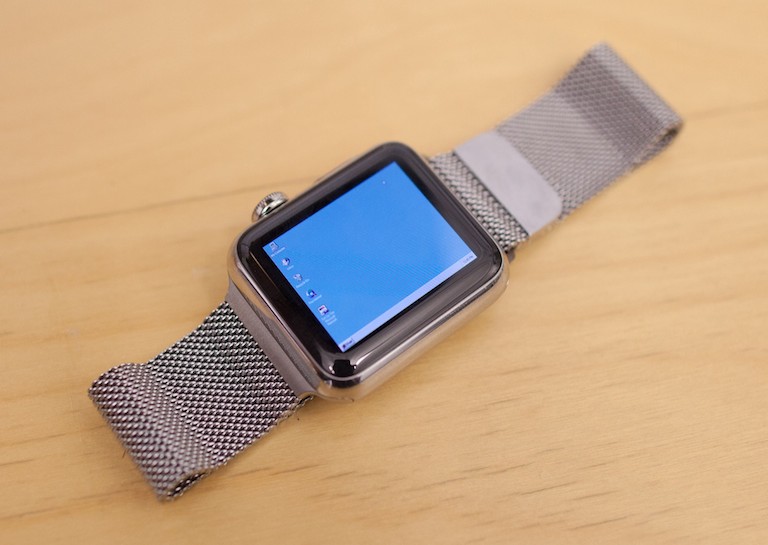 If this is something you want to try to do, you can check out a more detailed list of steps on Nick's blog here. The downside to this, is that the OS takes about an hour to boot up, and a couple of minutes to load any program, so it's super useful if you want to waste a day staring at a constantly dimming watch screen. Anyway, loading a Windows 95 operating system onto a 2016 Apple watch will never stop being awesome.